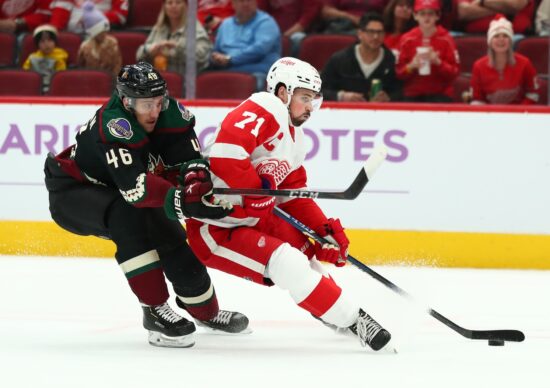 The Detroit Red Wings will be looking for a change in fortunes on Wednesday evening, as they welcome the St. Louis Blues to town. The hosts are without a win in three, while the Blues will be looking to win for a second straight game.

Red Wings Stuck In A Rot

The Detroit Red Wings come into this fixture on Wednesday evening in a poor run of form, as they have lost their last four in the NHL. Defensively, they have been vulnerable throughout that run, as they have allowed 17 goals in total. However, over their last ten games, their record is slightly better. They have won four during that run, with their recent run of form making up four of their five defeats during the run. Conceding goals has been an issue throughout the season to this point, as they have allowed 67, which is the second-highest in the Atlantic Division. Only the Montreal Canadiens have allowed more goals at this stage.

The Red Wings were unfortunate in their last NHL outing, as they were narrowly beaten 2-1 by the Arizona Coyotes after overtime. The Red Wings had the lead for much of that game, as Dylan Larkin scored in the opening period. However, they allowed an equalizer in the third period and then conceded the vital goal in the overtime period, which meant that their hard work was ultimately for nothing.

The St. Louis Blues may not be as prominent as they would have liked in the outright Stanley Cup betting for this season, but they are at least looking good value for a charge towards the playoff places this season. They are currently in second in the Central Division, having won ten from their 18 games so far this season in the NHL.

However, their record over their last ten games isn’t too dissimilar to the Red Wings, as they have won four times, and have lost on five occasions in regulation time. The Blues do at least come into this game having won in their last outing though, as they powered to a 5-2 success against the Vegas Golden Knights. St. Louis started strong in that game, scoring three inside the opening period. Tyler Bozak, Justin Faulk, Ryan O’Reilly, and Niko Mikkola were among the scorers for the Blues.

The chances of a win for the Blues are certainly helped by the run of wins that they have put together in recent meetings against the Red Wings. They have won the last two, scoring five in each of the games. Meanwhile, they have also recorded victories in five of the previous six meetings.

The Red Wings looked much more competitive in their last outing and will be hoping to make home advantage count this week. However, we will be sticking with the Blues courtesy of their excellent record against the Red Wings.