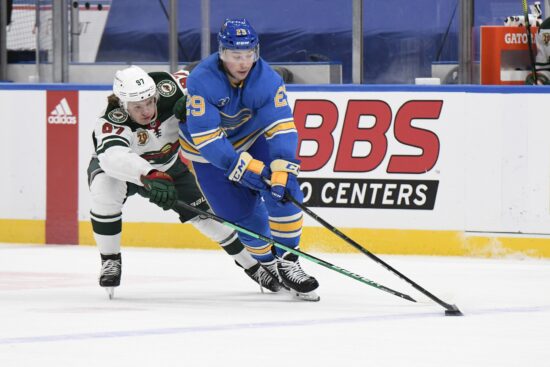 If you’re looking for the latest Blues vs Sabres prediction and odds, then look no further than Vegas Odds.

The St. Louis Blues are looking more and more like serious playoff contenders with every passing game. They come into this fixture looking to record an eighth straight victory, while the Buffalo Sabres will be looking for a second consecutive win in the NHL.

After a slow start to the season, the St. Louis Blues have recovered extremely well. They come into this fixture on Wednesday evening looking to record an eighth straight win, and they are currently the team in the Western Conference with the longest winning streak. The Blues have gone 7-3-0 over their previous ten.

St. Louis continued their charge up the Western Conference standings earlier this week, as they recorded a professional 3-1 home win against the Anaheim Ducks. The Blues wrapped up the win with two goals in the final period of that fixture. Noel Acciari was in fine form, as he scored twice, while the other goal was netted by Justin Faulk.

However, the Buffalo Sabres already look to have a big challenge on their hands if they are to finish in a playoff position this term. They have gone 8-11-0 so far this term, and they have also lost on eight occasions in regulation time in their previous ten games. They have already allowed 68 goals, which is the second-worst defensive record in the Atlantic Division.

But, the Sabres do come into this fixture after a morale-boosting win in their previous fixture on Tuesday evening. That win was a fine success against the Montreal Canadiens, with the Sabres landing a 7-2 victory on the road. Jeff Skinner scored twice in the win, while Rasmus Dahlin, Tage Thompson, and Alex Tuch also netted.

The fact that the Sabres are playing on back-to-back nights is a pretty big concern against an in-form Blues. St. Louis has been excellent in their previous seven fixtures, and we would expect them to come out on top once again on Wednesday.