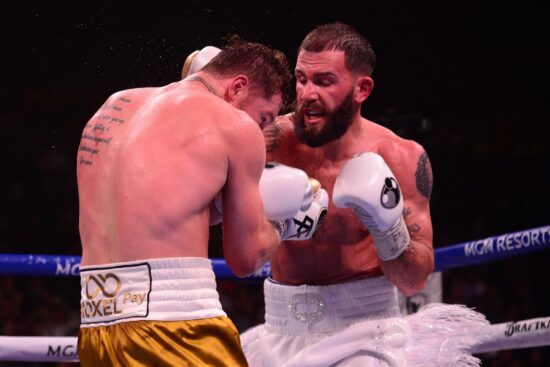 A huge fight in the super middleweight division will occur at the Barclays Center, New York, on October, 15, as Caleb Plant returns to the ring. The American has been in action since losing his perfect career in an undisputed showdown against Canelo Alvarez in November 2021. Anthony Dirrell will be looking to inflict more misery in New York.

Plant Hoping To Get Back Into Title Picture

Caleb Plant’s return to the ring will grab all the attention in the U.S. in October, as he looks for a dominant victory against Anthony Dirrell. Victory for the former IBF super middleweight champion could potentially set up a rematch against Canelo Alvarez, which has been something that Plant has already spoken at length about when it comes to future fights.

Plant was outclassed in the fight against Canelo in November of last year, as he was eventually stopped for the first time in his career. The Mexican’s eleventh-round stoppage was enough for many to end their bitter feud. However, Plant remains the likely next-best in the super middleweight division, as he has beaten many huge stars throughout his career.

That includes decision victories against Jose Uzcategui and Caleb Truax, while three of two of his 12 wins by KO have come against Vincent Feigenbutz and Mike Lee.

There’s little doubt that Dirrell comes into this super middleweight bout as the massive outsider in the betting. The 37-year-old is a former two-time WBC super middleweight champion and has won 34 of his 38 professional fights. He has shown throughout his career that he is a knockout star, winning on 25 occasions by this method.

However, his comeback in 2021 didn’t exactly go to plan, as his contest against Kyrone Davis was ruled as a draw. He finally got back into the win column last year, as he stunned Marcos Hernandez with a fourth-round KO.

At his very best, he has everything needed to ask questions of Plant in this bout, but whether his star performances like the ones we saw against Avni Yildirim and Caleb Truax are a thing of the past remains to be seen in New York.

This will be far from a formality for Plant on his return to the ring. Dirrell has shown throughout his career that he has what it takes to hang with the very best in this division. However, we could see the fight going the distance, with Plant narrowly getting the advantage.