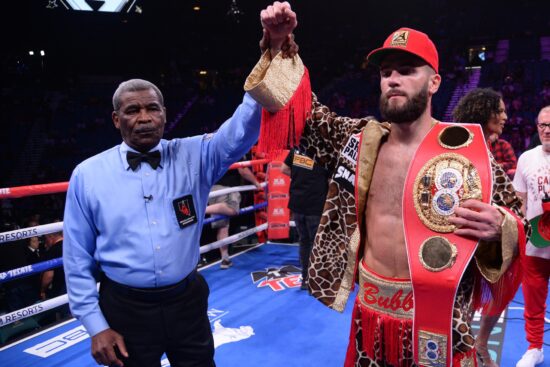 One of the most interesting boxing events of 2021 has just become a whole lot more interesting following the explosive scenes that were captured by cameras at the first press conference between Canelo Alvarez and Caleb Plant. Anticipation was already high for the super middleweight unification bout, which is set for Saturday, November 6th.

What Went Down At The Press Conference?

The first press conference since the bout was announced took place on Tuesday, as Plant and Canelo came face to face for the first time. Already, it is evident that there won’t be a respectful build-up to the fight, as the two came to blows during the press conference. Plant was quick to get under the skin of the WBA, WBC, and WBO champion, as he accused him of being a ‘drugs cheat’, which was alluding to his failed test back in 2018.

However, Canelo wasn’t about to let Plant get his excuses for defeat in early, as he struck back by claiming as much. Canelo then put his hands on the unbeaten American, shoving him across the stage. Plant responded by trying to land a left hook on the Mexican, who has lost just once in his professional career. However, Canelo evaded the shot, and fired back with two shots of his open to cut Plant open just below his right eye.

The WBA, WBC, and WBO champion admitted afterwards that he believed that the brawl was started by Plant, as he revealed that the American had insulted his mother in the tense staredown. However, Plant was quick to throw the blame into Canelo’s corner and pleaded his innocence.

Who Is The Favorite In The Betting?

The scenes at Tuesday’s press conference will only raise the ante before the two meet with the IBF, WBC, WBA, and WBO titles on the line in November. Canelo is still the clear favorite in the betting to win the unification fight, as he is priced at -900. Alvarez has been beaten on just one occasion in his 59 professional bouts, with that defeat coming back in September 2013 against Floyd Mayweather. Canelo also has two draws on his record, with the most recent of those coming in the first of his two stunning fights against Gennady Golovkin in September 2017.

The reigning IBF champion, Plant, is currently priced at +550 with BetOnline.ag to win the unification fight. Plant has been the IBF champion since beating Jose Uzcategui in January 2019, and has since successfully defended the title on three occasions. However, there is no denying that this is the American’s biggest challenge of his career, and presents a huge step up in opposition.