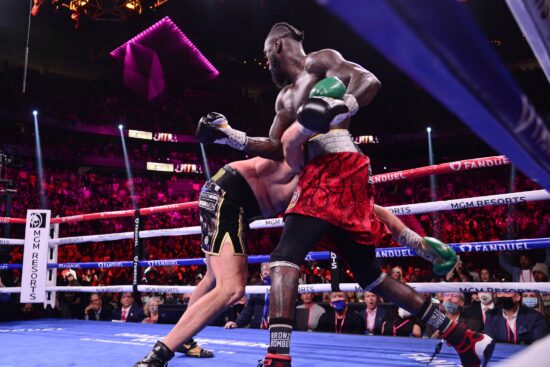 It looks set to be a captivating night of boxing action in New York on Saturday, October 15, as Deontay Wilder makes his long-awaited return to the ring. He will take on Robert Helenius, as he bids to avenge two consecutive defeats against Tyson Fury.

Wilder Looking To Bounce Back From Setbacks

It must have been a testing 12 months for Deontay Wilder, as he has had more than enough time to sit down and watch his last two fights. Both ended in stunning KO defeats against Tyson Fury, as the Brit has now firmly put the American in his rear mirror. However, Wilder has proclaimed that he still intends to become world champion again, and his path to a potential fight with either Fury or Oleksandr Usyk starts in October.

Before the first defeat against Fury in February 2020, Wilder was one of the most feared boxers in the sport, boasting a record of 42 wins in 43 bouts. Even more impressive was the fact that he recorded 41 of those victories by KO. However, the wheels seemed to come out in both bouts against the Gypsy King, as he looked outclassed and couldn’t land the big shots as he had against prior opponents. But, the task in October will be to put those fights behind him and get back on track.

As the odds would suggest, Helenius is the massive outsider to claim victory in the fight in New York. The Nordic Nightmare has a steady professional record of 31 victories from 34 fights, but the fact that he has been beaten on two occasions by KO doesn’t look good for his chances in this bout. However, since his last defeat, he has bounced back to form, scoring three straight stoppage victories in bouts against Mateus Roberto Osorio and Adam Kownacki.

The latest of those victories against Kownacki occurred on the Fury/Wilder III undercard 12 months ago. That means that he doesn’t even boast recent ring experience over his heavy-hitting rival in this bout. Furthermore, the Scandinavian has come up short in the biggest fights of his career to date, which includes a loss against former world title challenger Dillian Whyte in 2017.

The fact that Helenius has already been beaten twice by stoppage doesn’t look good for his chances against Wilder in this bout. The American will be looking for a statement win to get back into title contention, and I would expect him to end this fight within the first five rounds.