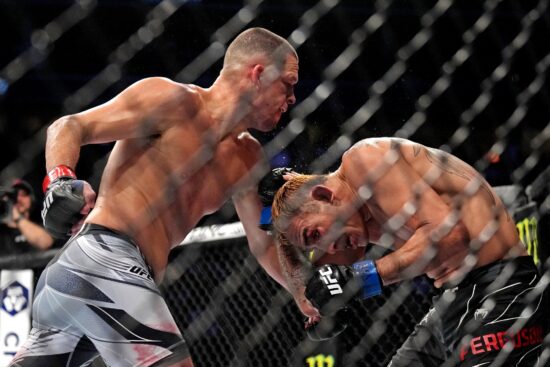 There appear to be a number of interesting bouts that Jake Paul may be involved in over the next 12 months or so. However, one that appears to be attracting more interest than most is a bout against former UFC star Nate Diaz. You can find the latest odds for the potential bout below, as well as an insight into the potential fight.

The latest Vegas Odds for a bout between Jake Paul and Nate Diaz aren’t yet available. Bookmark this page and return at a later date to find the Vegas Odds.

When Could The Fight Happen?

A showdown between Jake Paul and Nate Diaz has been rumored for a number of months. However, any potential date for their fight is likely not going to be announced until at least after Paul’s upcoming bout with another former UFC star- Anderson Silva.

That fight is set for the end of October, but it has been rumored by several outlets that talks between the camps of the fighters are still ongoing. Diaz has already reportedly got ringside seats for the fight on October 29, and he is keen to face whichever fighter comes out on top.

As a date is not yet announced, it may be tricky to assess the chances of both fighters. That is only made more difficult given that this will be the first time that we will see Diaz in a boxing ring.

After more than 12 years in the UFC, he left the company earlier this year, and immediately set his sights on a number of potentially money-spinning bouts in boxing. Despite UFC working hard to tie him down to a new deal, a date with Paul always seemed like a more financially beneficial deal.

However, plans for the potential bout between Paul and Diaz are likely to depend on how the YouTuber performs against Silva at the end of October. Paul has already made his name by defeating MMA stars, as he has already recorded a victory against Ben Askren and two victories against Tyron Woodley. These fights have done very little to enhance his reputation among boxing purists, as he is yet to fight an actual professional boxer.

While the fight may not have been officially announced, it only seems a matter of time before a deal is agreed. Much like all the other Paul fights, he seems to have the advantage in the ring over inexperienced boxers. That could once again be the case in this showdown against Diaz.