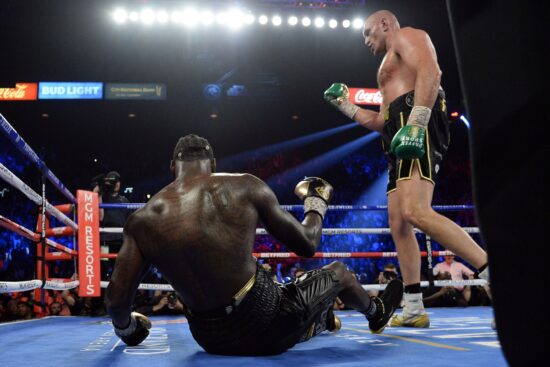 The worlds of boxing and MMA have clashed on many occasions in the past ten years. However, there may not be anything near the potential clash we may see between Francis Ngannou and Tyson Fury. Despite no official agreement being reached, the fight has attracted the interest of bettors online, which has seen a BetOnline market open for the potential bout.

Any potential bout between Tyson Fury and Francis Ngannou was always considered unlikely. However, that changed earlier this year following Fury’s successful title defense against Dillian Whyte. Ngannou crawled into the ring after the bout and immediately claimed that he wanted a future fight with the Gypsy King. That led to an exchange between the two on social media, with Fury calling the former UFC star a chicken.

Ngannou replied to the comment by reiterating that he wouldn’t take his eyes off the Gypsy King and that he would see him in 2023. However, fans eager to see the fight will likely have to remain disappointed for the foreseeable future, as Fury already has his sights set on unifying the heavyweight division, with bouts against Anthony Joshua and Oleksandr Usyk already penciled in for either side of the New Year.

Francis Ngannou has enjoyed a stellar career in the UFC, winning the UFC Heavyweight Championship on one occasion. Many believe that he could successfully crossover into boxing after winning 12 of his 20 professional fights by knockout. However, facing Fury is getting into the sport at the very deep end. He will come up against an undefeated lineal world champion that has looked at the very top of his game throughout 2022.

No professional has ever looked like beating the Gypsy King, which suggests that an amateur potentially breaking his unbeaten record is a staggering prediction. Fury is one of the greatest heavyweights of all time and deserves to do whatever he wishes once he finally calls time on his career.

However, we see this bout against Ngannou as a complete mismatch. There is no chance that the former UFC star will come out on top against Fury, which means that the only winners are the two involved, who will likely pick up extremely healthy cheques for a night’s work.