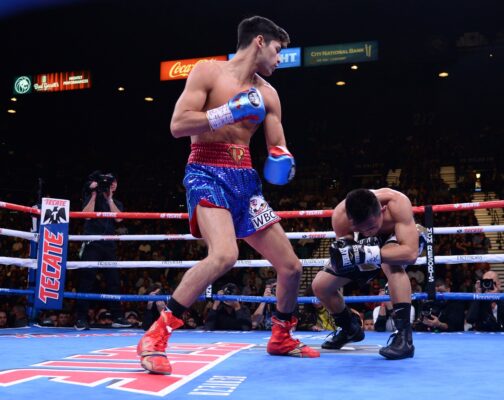 Whenever Ryan Garcia steps into the ring it is a box office attraction. The lightweight is one of the most exciting new talents in the world, and has all the ability to be one of the biggest box office draws over the next ten years. Therefore, Ryan Garcia vs Javier Fortuna promises to be an unmissable night of action in Los Angeles.

Garcia Plans To Put On A Show

Ryan Garcia is one of the most exciting boxers that we have seen in recent years, and he is already planning to put on a show for the audience and viewers when he takes on Javier Fortuna. Bigger fights will likely come over the coming years, including a predicted showdown against WBA lightweight champion Gervonta Davis.

Garcia has a perfect 22-0 professional record coming into this fight, with 18 of his victories coming inside the distance. His most dominant high-profile win to date came against Luke Campbell at the beginning of 2021, as he captured the WBC interim lightweight title with a stunning seventh-round knockout. However, we didn’t see Garcia defend the title, as he didn’t step back into the ring until April of this year.

That night was more of a professional display by the 23-year-old, as he claimed a unanimous decision victory against Emmanuel Tagoe. In July, he will be looking for a statement win to set up the fight that the world wants against Davis.

Fortuna Needs All His Experience

Javier Fortuna will be looking for more than a pay cheque when he steps in the ring against Ryan Garcia in July. The 32-year-old is an experienced campaigner and has held a number of world titles throughout his career. His most dominant run came between 2015 and 2016, as he held the WBA super featherweight title. However, he should be taken seriously at lightweight, as he previously challenged for the IBF title back in 2018.

Fortuna will step into the ring for the 44th time as a professional against Garcia. He has picked up 37 victories and has suffered three defeats. The experienced fighter has also had one draw and two no contests.

His latest defeat came in July of last year when he challenged for the WBC interim lightweight title as he was beaten by a unanimous decision by Joseph Diaz. However, he returned to the ring in February with a stunning display against Rafael Hernandez with a first-round KO win.

This shouldn’t be the hardest night of work in Garcia’s career. We fully expect the talented 23-year-old to pick up a statement win with a stoppage victory against Fortuna and set the scene for a title showdown against Davis before the end of the year.