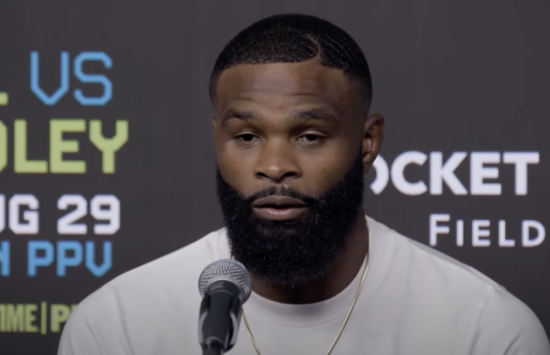 It is July 2017 and UFC welterweight champion Tyron Woodley has just put in an incredible performance against ground specialist Damien Maia to defend his title for the third time.

If someone had told me that night that in four years’ time, ‘The Chosen One’ would have been cut from the UFC following four consecutive losses and forced to resort to exhibition boxing bouts against YouTubers, I would have laughed and asked for some of whatever they were on.

But the stark reality is that is exactly where ‘T-Wood’ now finds himself – winless in his last five fights, in all disciplines.

Sunday evening saw a jam-packed crowd pile into the Rocket Mortgage FieldHouse in Ohio and witness the unbeaten Paul take Woodley the distance before narrowly winning by way of the judge’s scorecards.

Following what was a hugely disappointing loss for the former UFC star, which now sees Paul improve to a professional boxing record of 4-0, Woodley has spoken out for the first time.

Speaking during a post-event press conference, the ex-UFC welterweight champion believes he should have been crowned the fight’s winner and has insisted the pair should run it back and finalize a lucrative rematch.

I feel like I won that fight. I feel like I landed the power shots. I feel like even when he landed a shot, I f***ing brushed it off and came back and cracked him. I was in his face, I was in his sh**, pause, and his back was against the ropes the entire time. I was walking him down.

I could have been more assertive. I was patient. I was seeing my shots, but I didn’t want to be antsy with that overhand right. He may have landed it a few times, but I know he missed a lot.

It’s done. We’re doing the rematch. I’ve got to get that win. It was too close. This was a movie. Ain’t nobody going to push it like me and him did. We sold the sh** out of it.

Tyron Woodley on his loss to Jake Paul