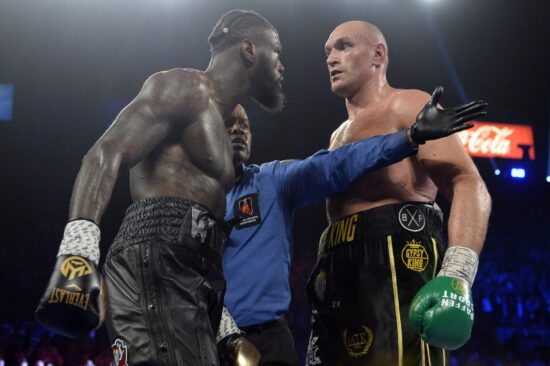 It has been a busy year of new heavyweight stories, with much of the action taking place outside of the ring. There had been hope that a huge unification fight could be set between Tyson Fury and Anthony Joshua, but those were ended after arbitration ruled that Deontay Wilder must get his rematch for the WBC and The Ring heavyweight titles.

UPDATE: It’s believed that the bout will be delayed due to a covid outbreak in Fury’s camp

It has been a frustrating couple of months for fans of Tyson Fury, as the long-awaited unification fight with Anthony Joshua looked to be days away from happening. However, those plans were scuppered by the Wilder camp, which means that the reigning WBC champion must first beat the American once again before making plans to unify the division. There’s no denying that Fury would have been as irritated as his fans when it came to the situation, but the Gypsy King has vowed that Wilder will regret wanting to step into the ring with him once again.

Fury remains undefeated throughout his professional career, as he has won 30 of his 31 fights. The only blip on his record was the draw that Wilder and Fury had back in December 2018, which was a highly contentious decision. However, Fury returned to the ring after that draw with victories against Tom Schwarz and Otto Wallin. The biggest night of his career came in the second fight between the heavyweights, as he produced a stunning display of tactical and skilful boxing to finish Wilder in round seven.

No More Excuses For Wilder

Wilder has fought to get this trilogy fight against Fury, as he looks to regain his WBC and The Ring titles. However, there is no room for error for the 35-year-old this time around, as he made no end of excuses when it came to his first professional defeat last time out against the Brit. Instead of recognising that the best fighter won, Wilder lamented his entrance costume being too heavy, and was also critical of his own coaches. As well as that, he alleged that his water was spiked, but with no clear evidence.

A defeat against Fury in July would be damaging to his legacy, and it wouldn’t be clear to see where he would go next. There’s no doubting the ability of Wilder, who has a 98% knockout-to-win ratio, and he has vowed to get revenge on Fury in the first press conference between the pair. But, whether he can live up to that promise remains to be seen.

Who will win the fight between Wilder vs Fury 3:

It will be a must-see fight between the two heavyweights in July, but it is increasingly difficult to see anything other than history repeating itself. Fury is the better technical boxer, and if he can see out the early flurry of punches that Wilder will throw, then Fury will control the tempo of the bout and record another knockout victory, just like he did in the second fight.