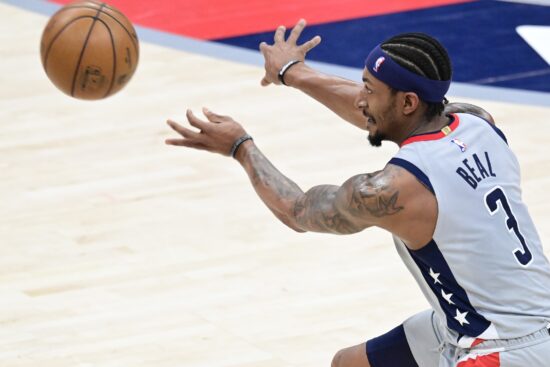 Bradley Beal’s decision to decline his player option for the upcoming season was the biggest news in the NBA last night. James Harden did the same thing, but the Beard is expected to stay in Philly, and he only did that because of cap space so that the 76ers can gain more money to land powerful additions.

The situation regarding Beal isn’t like that at all.

Two Possibilities on the Table

This is a crossroads for one of the best scorers in the last few years because he has 29 years and is in his prime. The question is will he go after the money or a chance to attack the title.

He played only 40 games last year due to a season-ending wrist injury, averaging 23.2 points with 6.6 assists and 4.7 boards. After three in a row, it was the first year for Beal to score fewer than 30 points.

Celtics Emerge as the Top Favorites for Next Destination

If he leaves the Wizards, the Boston Celtics have the highest chances of signing the lethal shooter, +300. Boston needs such a guard who is able to both score and pass, and he would fit perfectly into the Celtics’ backcourt.

Jayson Tatum showed vulnerability during the NBA Finals, and he needs another terrific attacker to help him in the clutch moments. Adding Beal would be a major boost for the Celtics’ title prospects.

There is one thing you need to know, and that is that Beal babysat Tatum while the latter was a baby. So they two go a long way in the past.

Portland Trail Blazers are next on the list, +400. The Blazers have all the assets to make this deal happen, and with Beal and Lillard paired up, plus a few other additions, this team would finally be competitive in the ferocious Western Conference.

At +500, we have the Miami Heat, who would gladly give up on several of their players to have Beal. The Heat have the assets and the room in the cap to make this deal happen, and we say that if it does come true, they would probably be the top favorite for the NBA title.

The Lakers are +600, Nets +650, Atlanta Hawks, who are very aggressive at the start of the free agency, +750, and the Denver Nuggets +800. The Nuggets were in the rumors already last year, and apparently, they are serious in intentions to land Beal.

Beal was the third pick in the 2012 NBA Draft, and in 645 games played in the NBA, he averaged 22.1 points, with excellent shooting percentages. He is a three-time All-Star and a 2021 All-NBA Third Team.