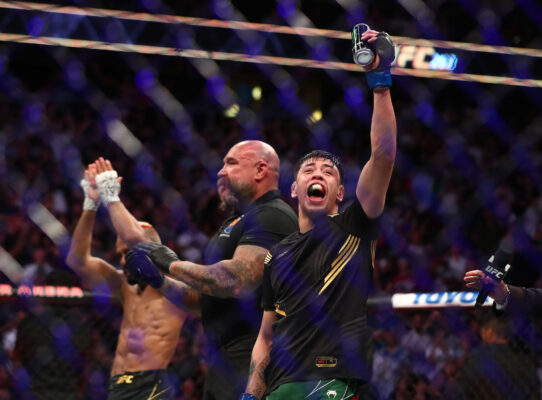 Following what was one of the most impressive performances ever seen inside the octagon from a title challenger, UFC flyweight champion Brandon Moreno is now set to defend his strap against former champion Deiveson Figueiredo in what will be a trilogy bout.

The mouth-watering trilogy, which is scheduled to place at UFC 269 on December 11, will be broadcast live, however, a confirmed location and venue have yet to be announced.

The news that the UFC has finalized what is likely to be one of the best fights of the year, was confirmed by ESPN’s Brett Okamoto.

Following what have already been two incredible title fights, online oddsmakers have clearly found it difficult to split both fighters.

The pair’s first encounter took place in December 2020 and famously ended in a draw ensuring Figueiredo would remain the division’s champion.

However, UFC 263 back in June hosted an eagerly anticipated rematch which saw Moreno dethrone the usually dominant Figueiredo in spectacular fashion.

Looking to reclaim his title, the former Brazilian champion will be desperate to go two up against easily his toughest ever opponent.

Elsewhere, Moreno, who will still be getting used to life as a champion, will be confident he can replicate last summer’s heroics and come away with another win and in turn successfully defend his title.