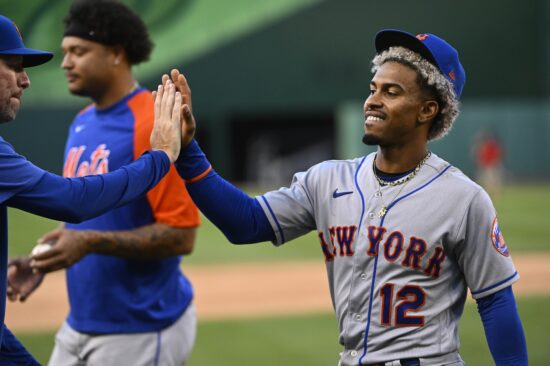 The Atlanta Braves whiffed on their first attempt to close the gap on the New York Mets in the NL East, falling 6-4 on Thursday night. The good news for Atlanta is that their are four games left in the series including a double-header on Saturday, the bad news is that the Braves will face Max Scherzer and Jacob deGrom in two of those four contests.

Friday’s Braves vs Mets matchup may be the best chance for Atlanta to get a win this series, but the Vegas odds still have the visitors as +128 underdogs. New York is a -148 favorite for game two, which isn’t a bad price considering they’ve won 9 of their last 10.

Braves In for a Rough Weekend?

Atlanta couldn’t get the opener in what was on paper a good matchup as Kyle Wright and Carlos Carrasco were the starting pitchers. Wright had allowed 2ER or less in 5 of his last 6 starts for the Braves, but gave up 6 ER over 6.0 IP to the Mets on Friday night – serving up 4 HRs. Atlanta scored 3 ER over 6.0 IP against Carrasco which was actually a solid offensive performance considering he hadn’t allowed a run over his previous three starts.

The Mets had a power surge on Thursday night, so Ian Anderson (9-6, 4.99 ERA) will try to keep the ball in the park when he takes the mound in game two. It’s been a tale of two second half starts for Anderson, who gave up 7 ER in just 3.0 IP against the Angels in his first outing back from the All-Star break but bounced back for 6.0 IP of 1-hit baseball last Saturday in a win over Arizona.

Ronald Acuna, Jr. had a HR for the Braves on Thursday night and Michael Harris II going 2-3 with 2 RBI was pretty much the only other highlight of the loss. It’s early in the month, but Atlanta has started 1-2 in August after going 21-6 in June and 18-8 in July. With Scherzer and deGrom looming for the Mets the next couple days the Braves could be looking at matching about 1/3 of their losses they’ve had the last couple months in just one weekend.

The AL Central and NL Central look like they’ll go down to the wire, and the NL East is pretty much the only other division up for grabs at the moment. The Mets can go a long way in changing that with four more games against the 2nd place Braves the next three days, already boosting their lead to 4.5 games with Thursday’s win.

HRs were the offense of choice in the series opener, with Pete Alonso and Daniel Vogelbach going deep and Tyler Naquin hitting two balls out of the yard. Vogelbach and Naquin were both acquired towards the end of July, and Naquin became the first player in club history to have 2 HRs in his home debut. The Mets recently wrapped up a 5-1 road trip.

Taijuan Walker (9-2, 2.79 ERA) on the mound gives the home team value in the Braves vs Mets matchup. The right-hander has had a solid year, but he’s also allowed 3ER in both of his starts since the All-Star break although they both ended up being Mets wins. Overall New York has won 7 of Walker’s last 9 starts.

This feels like a statement weekend for New York and with a playoff atmosphere, much like their last home series when they tallied a 6-3 and a 3-2 win over the Yankees. Walker has been solid most of the year, and when he hasn’t he’s been bailed out by a Mets offense that showed some nice pop in the series opener.