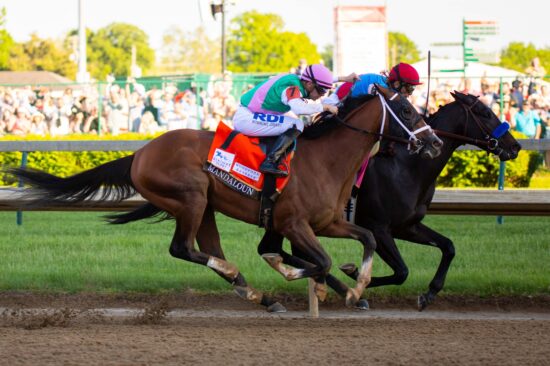 The road to the Breeders’ Cup takes many turns, and for some hopefuls, their passport can be stamped this weekend in one of two qualifying races. Churchill Downs hosts the G2 Stephen Foster Stakes, while the Princess Rooney Invitational is run at Gulfstream Park.

The G2 Stephen Foster stakes is part of the Breeders’ Cup Challenge, with the winner getting automatic entry into the G1 Breeders’ Cup Classic. Previous winners of both races include Curlin, Gun Runner, and Awesome Again, which makes it a standout race when it comes to assessing the Classic contenders this year.

Mandaloun could start favorite for the race this Saturday, as Brad Cox-trained horse makes his first start back on American soil since finishing ninth in the G1 Saudi Cup. We would be willing to look past that run, as he has been extremely solid on U.S. soil. That includes wins in the G1 Louisiana Stakes, G1 Haskell Stakes, and last year’s Kentucky Derby.

Meanwhile, Last Samurai got back on track with a victory in the G2 Oaklawn Handicap last time out but was well held on his previous start at Churchill Downs in November.

A chance could be taken on Americanrevolution this weekend for Todd Pletcher, as the four-year-old gets weight from many of his main contenders. He made his return after a long break with a fourth in the Blame Stakes in June, hitting a speed figure of 107. However, his win in the G1 Cigar Mile, which reached a figure of 115, is still eye-catching form, and he will likely be a decent enough price this weekend.

The other Breeders’ Cup Challenge race taking place this weekend takes place at Gulfstream Park, as the G2 Princess Rooney Invitational has attracted a star-studded field. The winner of this race gains entry to the G1 Breeders’ Cup Filly & Mare Sprint, and previous victors in the race include Stormy Embrace, Musical Romance, and Spelling Again.

Last year’s winner for Michael McCarthy heads the betting for the race this weekend, as Ce Ce looks to become only the fifth horse to win the Princess Rooney in consecutive years. She was beaten on her previous start in the G1 Apple Blossom, but her third-place finish still scored a speed figure of 108. The Breeders’ Cup Filly & Mare Sprint winner will still take an awful lot of beating on a track where she loves racing.

Glass Ceiling is easily the biggest danger this weekend, as she has shown excellent form already this year; winning three from four starts. However, both her wins in graded company have come in Grade 3s, which includes a 111 speed figure when taking the Distaff Handicap. However, there are clear concerns after an underwhelming third in the G2 Bed o’ Roses when stepped up last time out.

Make Mischief also has the same questions to answer. She hasn’t proven her class in Grade 1 or Grade 2 company. She was fifth in the G2 Ruffian in May. However, she did bounce back with a 110 speed figure when winning the Critical Eye Handicap at Belmont Park. But, it’s hard to look past Ce Ce.