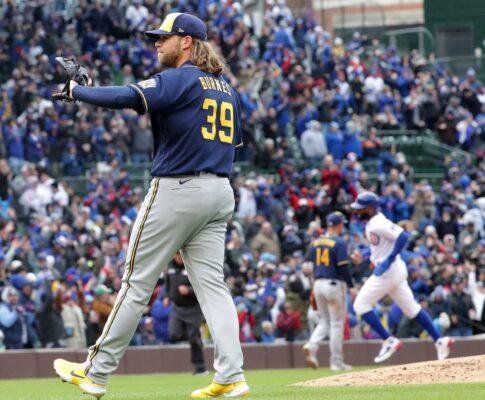 The Milwaukee Brewers will try to avoid the proverbial ‘look ahead’ game when they wrap up their three game series with the Baltimore Orioles on Wednesday. The Brewers have started off the year 2-3 on a six game road swing, but have their home opener on Thursday to kick off a 4-game weekend set with division rival St. Louis. Baltimore meanwhile is just trying to get a series win after being swept in Tampa Bay to kick off the year. As expected, Milwaukee is a huge -180 favorite with the reigning Cy Young winner on the hill.

Milwaukee is just a little bit off to start the season, it could be because they are expected to run away with the NL Central and have believed their own hype or maybe the shortened Spring Training has messed with a team that has a lot of roster turnover. Either way, it is also very early in the 2022 campaign, and the Brewers have won two of their last three while scoring 5 runs in each of those victories.

The Brewers had just 5 hits in Sunday’s 5-4 win to avoid the sweep by the Cubs at Wrigley Field, but they made the most of them with 3 HRs. Tuesday’s 5-4 win over the Orioles was a little more balanced with Willy Adames, Andrew McCutchen, and Lorenzo Cain all having multi-hit games. Are we going to see that Milwaukee offense though, or the one that was blanked 2-0 in Monday’s series opener?

Corbin Burnes makes his second start of the year on Wednesday night, and although he wasn’t horrible in the opener vs. the Cubs (5.0 IP, 3 ER) he also didn’t have the form that saw him go 11-5 last year with a 2.43 ERA and 234 K’s to get the Cy Young.

It has been noted that Burnes was not comfortable with the shortened Spring Training and needs some time to build his arm up, so we’ll see what improvements outing #2 brings. It was also a cold and rainy 40 degree day in Chicago last week, so some slightly warmer temperatures should help Burnes’ control.

Baltimore for the Series Win

The Orioles were 52-110 last year so chances at series wins are hard to come by. They have that opportunity on Wednesday night though albeit in a tough matchup against the reigning NL Cy Young Award winner.

We will see what the Baltimore bats can get going against Burnes but this is a very unfamiliar Interleague matchup. Kelvin Gutierrez and Jorge Mateo are the only players on the Orioles roster to ever face the Brewers pitcher, but on the bright side they are a combined 2-3 against the right-hander. Anthony Santander has been the hottest Orioles hitter to start the year, going 5-13 while also drawing 5 BB’s to post a .579 OBP.

Brandon Hyde would like to think he has the right man on the mound to try and pick up the series win, as John Means was solid last week going 4.0 IP and allowing just 1 ER to Tampa Bay. His offense didn’t do him any favors in the 2-1 loss to the 1st place Rays, but Means should also be able to go another inning or two in his second start of the year.

There’s not a ton of value on Milwaukee with a -180 price tag, but this total – although it’s low at 7.5 – looks very appealing. The Orioles are going to struggle to get anything going against Burnes, but at the same time the Brewers’ offense has been virtually nonexistent and Baltimore has their best pitcher on the hill.