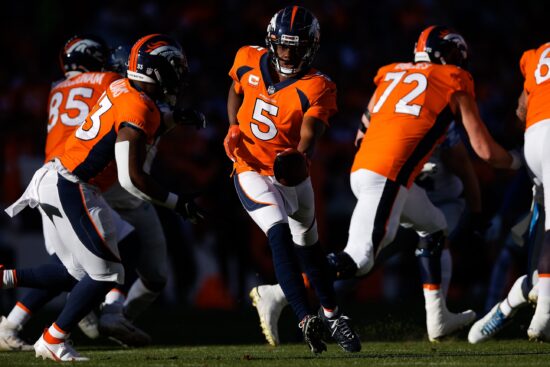 Denver Broncos vs Los Angeles Chargers could be the game that decides the playoff future of these two teams. The thing is that both have dropped down in the AFC Standings after losing two games straight. However, the team that wins the Week 17 game will significantly improve its chances of qualifying for the postseason via Wild Card.

So, which team is it going to be? If you take a look at the Vegas odds for this game, you’ll see that the Chargers are seen as the betting favorite. However, the Chargers’ defense has been horrible, which could mean serious problems for them on Sunday given the fact that the Broncos’ starting quarterback Teddy Bridgewater is expected to return after missing last weekend’s game due to a concussion.

Teddy Bridgewater is Back?

The Denver Broncos are coming off two straight losses, the first of which saw their quarterback Teddy Bridgewater suffering a concussion, for which he had to be rushed to hospital. The QB stayed under doctors’ supervision that night, but the checkup showed that he was okay.

Nevertheless, due to the concussion, he had to miss the Broncos’ next game, which they ended up losing as well. The good news is that Bridgewater is expected to make his comeback in Week 17.

With him as their signal-caller, the Broncos are expected to be more dangerous. Scoring hasn’t been a great weapon of theirs this season, but now is the perfect time for them to step up. The thing is that the Broncos are 7-8 right now, but a win on Sunday would put them back in the race for the playoffs.

Scoring against the Chargers shouldn’t be much of a problem for the Broncos. The reason is that the team from Los Angeles is among the worst in terms of scoring defense.

With an average of 27.4, the Chargers have the second-worst defense in the conference. Meanwhile, the Broncos are sharing the #1 spot in the list of the best AFC defenses with the New England Patriots.

Their defense might be horrible, but their offense has been superb in 2021. In fact, the Chargers have scored 408 points in 15 games, which makes their scoring offense the fifth-best in the conference. When it comes to the Broncos’ offense, they’re ranked fifth from the bottom.

Teddy Bridgewater is the man who could decide the outcome of this game. The Broncos will surely do well defensively and if Teddy and his offensive teammates do their job well, Denver will win. If they don’t, we’ll probably see a win for the Chargers, which probably isn’t going to be a big one.