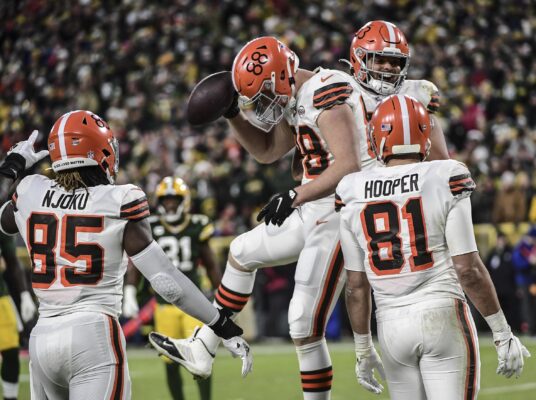 The first Monday Night Football of 2022 brings us a clash between two teams that are still in the playoff race. The team that wins will make one giant leap toward securing a place in the postseason. The team that loses will not make the playoffs. So, who’s it going to be – Cleveland Browns (7-8) or Pittsburgh Steelers (7-7-1)?

Browns Haven’t Been as Bad as Their Recent Results Suggest

Cleveland might be 1-3 in the previous four games, but this team hasn’t been too bad on the field. The thing is that in each of those three games that they lost, they give the opposition a run for their money.

For instance, in their last game in November, the Browns lost to their divisional rivals the Baltimore Ravens by one touchdown. They got their revenge in the next game, beating the Ravens and getting back in the race for the postseason.

Then, we saw them losing to the Las Vegas Raiders and Green Bay Packers, each time by just two points. The game with the Packers was a real thriller until the very end, showing that the Browns’ defense can do reasonably well even against such tough opponents.

In fact, Cleveland would’ve won that game if only their starting quarterback did slightly better. Unfortunately for them, Baker Mayfield had a horrible game, throwing for two touchdowns and four interceptions. Getting four of his passes intercepted is something that hadn’t happened to Mayfield before Week 16.

The Steelers Need to Worry About Their Offense

With just 301 points scored in 15 games this season, the Steelers have the fourth-worst scoring offense in the conference. The worst thing is that their form has been on a downward path. They’ve scored more than 20 points in only one of their previous five games.

Nevertheless, they’re still in the race to the playoffs. Actually, they have a better win percentage than their next opponent. However, if they lose on Monday, they can say goodbye to their postseason dreams.

The Browns defense will do the job right; it’s their offense they should be concerned about. QB Mayfield is coming off a nightmarish performance last week, but he surely wants to bounce back. If he does it, his team will win with ease.