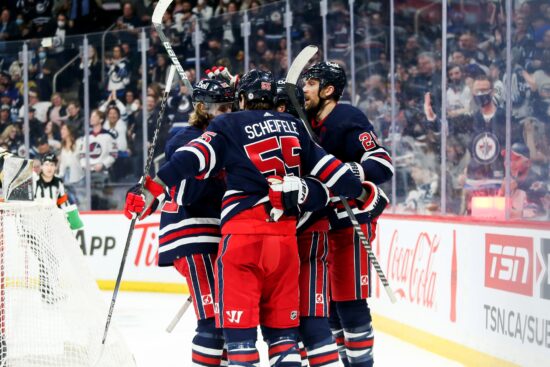 Friday, March 18 is when we’ll see the second Boston Bruins vs Winnipeg Jets duel of the 2021-22 season. Their first game finished 3-2 in the Bruins’ favor. It was played in Boston, while this game is taking place on the Jets’ turf, Canada Life Centre in Winnipeg.

In Winnipeg, the Jets have been fantastic lately, beating the Tampa Bay Lightning and Vegas Golden Knights in their previous two home games, scoring seven goals each time. The Bruins, on the other hand, are coming off a loss to the Minnesota Wild on the road. It was only their second defeat in regulation in March, during which they’ve collected 11 points in eight games.

Knowing that both teams have been playing great lately, there’s only one thing that’s certain – Saturday’s Bruins vs Jets clash is going to be a real thriller!

Boston Looking to Bounce Back to the Winning Track ASAP

The Bruins lost their most recent game, but before that, they were sensational, collecting 17 points in ten games. The match they lost on Tuesday evening was against the Wild, who won 4-2. Although they did concede more than their season average of 2.70, Boston’s offensive performance was the reason behind the loss.

The thing is that this team hasn’t been scoring a lot of goals lately. In fact, they put away just 13 goals in their previous five games, which for a team with a 37-5-19 record isn’t very impressive. Another reason why this should worry the Bruins is that their next opponent has been in a goal-scoring mood over the last couple of weeks.

Winnipeg has officially entered the playoff race! Even though the Jets are trailing behind the top 4 by at least eight points, their recent run suggests they could get to a playoff spot in near future. This team won four of their previous five games, scoring a total of 22 goals along the way.

Two of those wins happened at Canada Life Centre, and in each of those, the Jets put away seven goals. The first win was against the reigning NHL champions, the Tampa Bay Lightning – the Jets beat them 7-4.

Winnipeg players were even more impressive against the Vegas Golden Knights in a game played last Tuesday. The final score was 7-3 for the Canadian team.

The most impressive thing about Winnipeg’s performance in that game was that seven different players scored a goal. The Jets performed as a team that’s more than a sum of its parts, which could be their strongest weapon in upcoming games as well.

One may argue that Boston has better players than Winnipeg, but the Jets’ biggest strength is team power. Add to that the fact that Friday’s game is played on their turf, and you’ll see why it wouldn’t be a surprise if they grabbed a win.