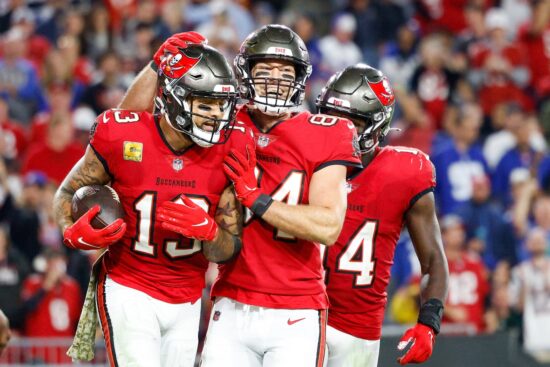 The Indianapolis Colts (6-5) have been in a superb run lately, but Vegas odds suggest it could come to an end this Sunday. It’s because, in Week 12, they’re locking horns with the Tampa Bay Buccaneers (7-3). The Bucs may not be playing their best football right now, but the fact that they’re the Super Bowl LV champs makes them the favorite against almost any team in the NFL.

The Colts have been playing fantastic football lately, as evident from the fact that they’re coming into Week 12 with three straight wins. Even before that, they played really well, losing only twice since September. Further, the two games they lost, they lost in overtime.

Their most impressive outing happened last week at Highmark Stadium where they obliterated the favored Buffalo Bills 41-15. Scoring so many points against Buffalo is not something many teams can brag about. In fact, before Week 11, the Bills had the best defense in the league.

Running back Jonathan Taylor was their hero, with five touchdowns. That was his eighth straight game in which he recorded at least one TD.

The Colts should also feel good about their defensive team, which managed to keep Josh Allen and his offensive teammates to only 15 points. That was the fifth time since September that they conceded under 20 points.

Can they continue playing like that for another week? It’s not going to be easy to pull it off as they’re taking on the NFL’s best offense – Tampa’s scoring average in 2021 is 30.9.

Buccaneers Not Playing That Great After the Bye

The Bucs famously went undefeated in the 2020 season after coming back from the bye. This season, however, they’re 1-1 after having a break in Week 9. They lost to the Washington Football Team 29-19; then rebounded with a 30-10 win over the New York Giants.

Their biggest concern ahead of Week 12 is that their quarterback Tom Brady hasn’t been playing at his best this month. After the bye, we saw him throwing a total of four touchdown passes in two games, while also getting three of his throws intercepted.

On a positive note, Brady is expected to bounce back as in Week 12, he’s playing against one of his favorite opponents. Against the Colts, Brady is 15-4. However, he still hasn’t played against them as a Buc. The Buccaneers vs Colts game on Sunday is going to be his first in Tampa’s jersey.

The Colts have been playing amazing football lately, but their fantastic run will probably come to an end this weekend. The reason is that the Bucs seem to have an antidote for them. First of all, the Bucs offense is capable of outscoring any team in the league, even when Brady isn’t performing at the top level.

Secondly, Tampa’s defense is great at run defense. With just 78.4 yards allowed per game – the league’s best – they should have no problems stopping Jonathan Taylor and other Colts’ rushers.