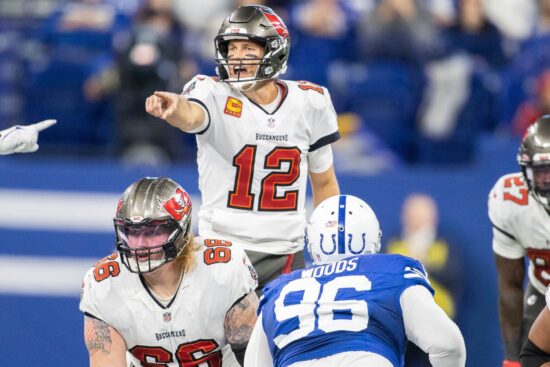 The Tampa Bay Buccaneers are 8-3 on the season, sitting in the top position in the NFC South ahead of Week 13. Still, they haven’t been too impressive in the last couple of weeks, losing two of their previous four games.

One of the reasons behind this is that their quarterback Tom Brady hasn’t been throwing too many touchdown passes lately – five in total in the past three weeks.

The good news for him is that on Sunday, the Bucs are taking on one of his favorite opponents, the Atlanta Falcons. Brady is 9-0 against this team, with three of those wins happening while playing for Tampa.

All Eyes on Tom Brady

The Week 12 game against the Indianapolis Colts saw one of Tom Brady’s worst performances of the season. Tampa’s QB went 25/34 for 226 yards and one touchdown. That was only the third time this season that we saw him failing to make 2+ touchdown passes. Further, Brady also got one of his throws intercepted by the Colts’ defense.

Speaking of interceptions, Brady threw six in the past four games, which accounts for two-thirds of his total interceptions in 2021. Luckily for Brady, he’ll have a fantastic chance to improve his stats. In Week 13, his team is locking horns with one of his favorite rivals.

The Falcons are the team against which Brady has a 100% record. As a Buccaneers’ QB, Brady is 3-0 against them, with his best performance happening in Week 2. That’s when we saw him passing for five touchdowns against the Bucs’ divisional rivals.

With 302 points conceded in 11 games, the Falcons have the worst defense in the conference. What’s even more embarrassing is that they haven’t faced too many offensive heavyweights this season. In fact, they’ve only faced two top 10 offenses so far – Tampa and Dallas.

Against those two, Atlanta conceded 40+ each time. Actually, this team’s worst offensive display was against Tampa, when we saw them allowing 48 points.

They did, however, do relatively well in the previous game. They won their Week 12 game against the Jaguars by 21-14. That was one of their best defensive displays of the entire season. Offensively, they did a great job running-wise. Actually, Cordarrelle Patterson was the one who did a great job, with two touchdowns to his name.

That was the first time we saw Patterson scoring a TD since returning from an injury. The bad news for Patterson is that he’s very unlikely to do something similar against Tampa. Why? Because the Bucs are the best NFL team in terms of opponent rushing yards, with an average of just 81.0 yards allowed per game.

The Bucs are superior to their opponents in literally all aspects of the game. Plus, they’re probably very motivated to grab a big win, which would silence their critics.