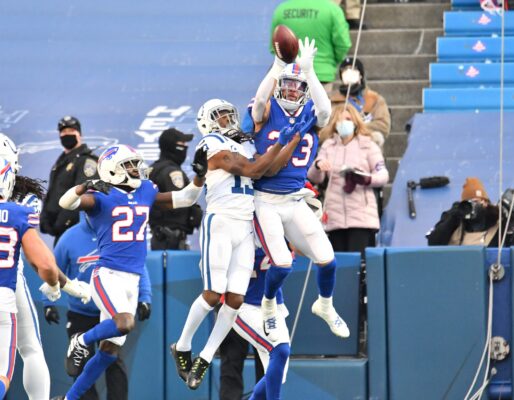 After 25 years, the Buffalo Bills have finally won a playoff game – they beat the Indianapolis Colts 27-24 on Saturday after a nerve-wrecking wild card game.

Apart from being their first playoff win of the century, the Colts vs Bills game was also the first time they played a postseason game at Bills Stadium in 24 years. Another milestone is that this game was the first time this season the Bills had supporters in the stands of their stadium.

The game will also be remembered for a fantastic performance of the Bills QB, Josh Allen, who’s inserted his name into the NFL MVB conversation.

The game saw Allen passing for 324 yards, completing 26 of 35 of his passes. Two of those passes resulted in Bills touchdowns. One pass was a 5-yarder to Dawson Knox; the other one was a 35-yards-pass to Stefon Diggs.

The touchdown pass to Diggs wasn’t the only time the two were in the spotlight. Allen hit Diggs for a total of three completions of over 20 yards.

Before the Colts vs Bills game, the odds on Allen were suggesting he was far behind Aaron Rodgers and Patrick Mahomes in the NFL MVP race. However, at the moment, Allan is the #2 favorite for the award, with +1100 odds. The Packers QB, however, still remains the biggest favorite at -350.

Buffalo Bills first playoff win since 1995 almost didn’t happen this year. In the last seconds of the game, the Colts were the ones to have the ball in their possession. The final play of the game was a chance for Philip Rivers to get his team the victory.

While facing faced fourth-and-11 from Buffalo’s 47, Rivers throw a Hail Mary pass aimed at T.Y. Hilton. Surrounded by Bills defense players, Hilton couldn’t get to the ball, which was batted to the ground by Micah Hyde.

What’s Next for the Bills in the Playoffs?

The game against the Colts was a wild card game of the Playoffs. At the moment of writing, it’s still unclear which team the Bills will face next – to find it out, we will have to wait for the last game of the weekend to finish.

If the seedings do not change, the Bills as the #2 seed would take on the #3 seed, the Pittsburgh Steelers. However, if the Steelers lose to the Browns tonight, the opponent of the Bills would be the winner of the Ravens vs Titans game.