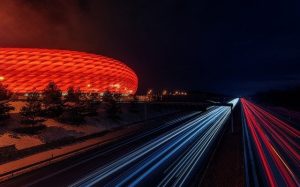 The EFL Cup more commonly known as the Carabao Cup kicked off today with some of the Premier League big boys taking on competition from the lower divisions.

The Carabao Cup holders Manchester City picked up right where they left off from the last time they were in action. On the weekend they battered Watford 8-0. They were up 5-0 in that game before 20 minutes and they again took an early lead in this one.

Their opponent today was Preston North End who are off to a good start in the English Second Division (EFL Championship). They currently sit third in the league on 17 points.

Preston were no match for Manchester City in this contest but few teams in England are. After their shock defeat to Norwich, Pep Guardiola was always going to demand a response from his men. They have done just that in their last two contests.

Arsenal got their Carabao Cup campaign off to a winning start by dismantling Nottingham Forest 5-0. Despite a host of changes by Unai Emery, the Gunners were in complete control from start to finish. The score line could have been much worse for Forrest. In total Arsenal had an incredible 27 shots on net but only 8 of them on target. While they were wasteful with a lot of their chances they were able to put away a high percentage of them that did manage to hit the target.

Mesut Ozil made a rare start for Arsenal. He played alongside a host of youngsters. Of the young players on show, it was 18-year-old Brazilian striker Gabriel Martenelli that stood out on the night. The Gunners were never really threatened and it was nice for them to have so many of their youngsters get on the score sheet in this match.

Meanwhile Nottingham Forest will be extremely disappointed by their display. Arsenal fielded a B side and Forrest have started off strong in the EFL Championship. They only sit 2 points off the league leaders.

The Spurs season goes from bad to worse as they are knocked out of the Carabao Cup on the first hurdle. Not only did they lose their first match, they lost to a team from the English 3rd division. It’s unclear how much longer Spurs boss Mauricio Pochettino will tolerate this losing or vice versa. Although he’s done a fantastic job as Spurs manager, he has to be somewhat on the hot seat at this point. If it wasn’t for the fact that they made it all the way to the Champions League Finals last season, it would have been considered a disappointing campaign.

This year they’ve picked up right where they left off last season with their inconsistent play to start the campaign. They do not look like a team challenging for the title. Dele Alli and Lucas played the entire match which should have been more than enough to see them through. Instead Spurs are knocked out of the Carabao Cup by a team that did not produce a shot on target.