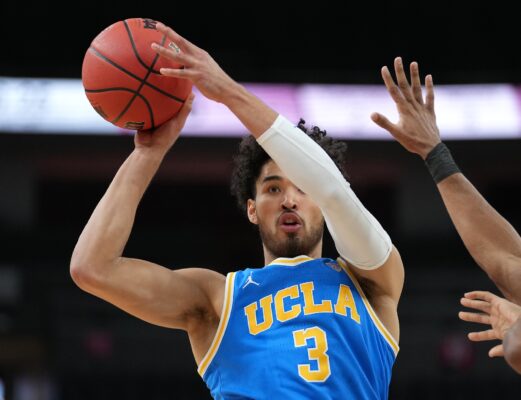 We’ve got an early game of the year candidate when the #1 Gonzaga Bulldogs meet the #2 UCLA Bruins in the Good Sam Empire Classic in Las Vegas. This is a rematch of last year’s thrilling 93-90 buzzer-beating win by Gonzaga which sent them to the national championship game where they eventually lost to Baylor. The Bruins have had to deal with that heartbreak for the past 7 months, so are we going to see some frustration let out here?

There was a time when Gonzaga would start seasons 20-0 but would barely crack the top 15 because of the quality of their opponents. That’s not the case lately though and especially this year, where the Bulldogs have already beaten Texas (86-74), meet #2 UCLA on Tuesday, and then turn around and play #5 Duke on Friday.

Not that they aren’t already, but Gonzaga is the clear-cut dominant team in college basketball if they can remain undefeated after this week. Of course, the 5-0 Bruins present a tough test, and they took the Bulldogs to the edge in last year’s 93-90 Final 4 matchup. The Zags are missing some key components from that game though as Jalen Suggs (18 points), Corey Kispert (15 points), and Jay Ayayi (22 points) are all off to the NBA.

Suggs hit a 37-footer at the buzzer to break the Bruins’ hearts last season but he was taken with the #5 overall pick by the Orlando Magic. This is Drew Timme’s Gonzaga team now, and he’s averaging 18.8 pts/game to start the season. Timme had 25 in the win over the Bruins last year, but he’s got some help in the form of 7’0 foot freshman Chet Holmgren who is averaging 18.5 pts/game over his last two

There are some that were saying UCLA shouldn’t be disappointed with last year’s loss to top overall seed Gonzaga considering the remarkable run the Bruins were on. UCLA was the #11 seed in last year’s tournament having to beat Michigan State in the play-in game just to get in the field of 64. Their remarkable run also included wins over #1 seed Michigan and #2 Alabama before finally succumbing to the Bulldogs.

There are no moral victories for these players, who were a 37-foot prayer away from at least playing another OT session in trying to upset Gonzaga. A win on Tuesday won’t ease the pain of last year’s loss, but it will still feel good.

Johnny Juzang had 19 points in last year’s Final 4 matchup with Gonzaga and he’s back this year as one of three Bruins players averaging over 15 pts/game. Jaime Jaquez, Jr. (15.6 ppg) and Jules Bernard (15.4) were all part of last year’s loss to Gonzaga as was Tyger Campbell (10.4 ppg) so there is a lot of extra incentive for the Bruins in this matchup.

Both teams come into this game undefeated and each have faced a challenge, Gonzaga beating a Texas team that was ranked #5 at the time and UCLA getting a win over #4 Villanova in OT. Basically, this is the perfect scenario the fine folks at the Good Sam Empire Classic drew up when they made out the schedule.

Oddsmakers have the Bulldogs as -6 point favorites here. There’s always good value when you can get Gonzaga giving single digits, but this is also a very experienced UCLA team.

NCAA Basketball Picks Against the Spread: