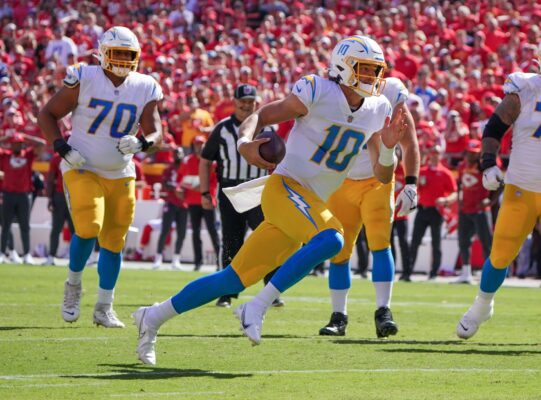 Justin Herbert and the Chargers will try to exploit the momentum gained against the Steelers and win in Denver. Though, that won’t be an easy job because of the Broncos’ capricious nature. We’ve seen them both winning and losing over the past few weeks in the moments when expected the least.

Chargers Living on the Edge

The past few games the Chargers played have been pretty exciting. Some of them saw the franchise from LA ending on the winning side, and some finished with them losing. Fortunately for Brandon Staley and his unit, the one against the Steelers had a happy ending.

WR Mike Williams caught a go-ahead TD pass to lift the Chargers and secure them a massive win over another rival for the AFC playoffs. Williams had 97 receiving yards, Keenan Allen 112, while Austin Ekeler posted 65 for two scores. Ekeler added two more TDs, only on the ground.

Meanwhile, the former Offensive Rookie of the Year, Justin Herbert, threw for 382 yards for three scores and one pick and ran 90 yards on nine carries, which is impressive.

Vic Fangio’s guys have posted back-to-back victories, one at home against the Football Team, 17-10, and the other in Dallas, where they shocked the Cowboys, 30-16. Instead of capitalizing on that, the Broncos lost at home this Sunday to the Eagles, 30-13. We really don’t know what to say any more about their oscillations.

One of the best defenses in the NFL allowed 30 points at home. The Broncos were blown into pieces on the ground, with the Eagles rushing for 216 yards in this event. It was by far one of the best running-game performances vs. Denver this year.

On the other side, Teddy Bridgewater threw 226 receiving yards but without a TD. Once again, when everyone expected to see the former Pro-Bowler stepping up and taking over the wheel, he choked. Regardless of solid numbers, he choked.

The Broncos won at the Mile High last year, 31-30, but in the second matchup, the Chargers redeemed for that defeat, posting a 19-16 victory.

Justin Herbert is a difference-maker in this case. Even though he still didn’t become an elite QB, he is on his way to becoming one. We can’t rely upon Denver’s defense to be at the highest possible level all the time and to constantly cover mediocre performances of the offensive unit. Sorry, but Teddy-B isn’t good this year, and although the Broncos have a home-field advantage, they are going to lose this contest. The LAC is in an excellent mood coming into this event, with a fired-up offense.