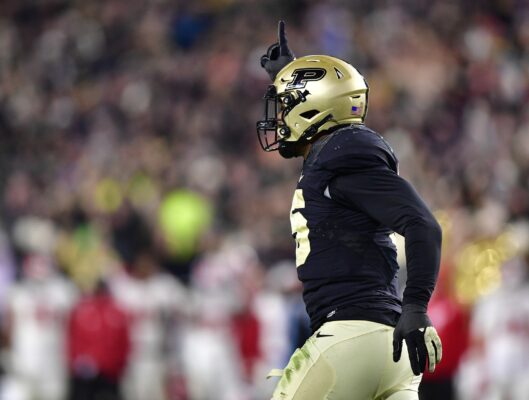 The Purdue Boilermakers play at home against the Iowa Hawkeyes in a matchup of two undefeated teams that are looking to avoid that first blemish on their record.

While Purdue has the upper hand in the odds, Iowa certainly has been a worthy opponent who plans their games based on their scoring abilities more than using an all-around game to succeed.

Iowa Eyes Their Next Prey

The Hawkeyes are flying into West Lafayette for this tough road matchup against Purdue. The Hawkeyes are leading the nation in scoring average with 94 points per game while allowing only 66.7.

The strategy for the Hawkeyes has been quite clear all season and has been successful. They want to get the ball in the basket as quickly as possible, which makes them a highly effective team on offense.

Iowa is led by PF Keegan Murray, who is averaging 24.6 points, 8.9 rebounds, and 2.3 blocks per game. He is the key element on their roster who increases their chances of winning every night just with his presence on the floor.

Purdue is sitting comfortably near the very top of the rankings along with powerhouse programs like Duke, Gonzaga, and Baylor. They will be challenged once again, putting their current ranking at risk when they face the very dangerous Hawkeyes, who are looking to take away everything that they have built so far this season.

Purdue manages to have one of the best balanced, well-rounded rosters that can find success easily on both ends of the court that works as a great unit, especially when facing high-scoring teams such as the Hawkeyes.

With four players averaging +10 points per game, it is easy to see that it is hard to stand out in Purdue as they all share equal responsibility not only shooting at the rim but when defending as well, making this one of the most complex challenges to face in the current season.

One Will Taste Defeat

After the buzzer, either one will now have a single digit in their defeats coming from a perfect record, in a game that has a lot at stake from both teams that have made a great job to start the season strongly to impose their game against their opponents.

Iowa also appears to be having a lot of struggle getting the wins while playing on the road, and in their last 11 games, they have been down to 1-10. This increases Purdue’s chances to defend their home court properly and hand the Hawkeyes a defeat.

Purdue (7-1), with a win, would be nearly certain to rise to No. 1 in the national college basketball rankings; Purdue is ranked No. 2 after beating Florida State Seminoles on Tuesday in the ACC/Big Ten Challenge. Ohio State came back late to beat Duke, helping give Purdue a boost.

The unranked Hawkeyes have the chance to make a difference tonight. Iowa beat Purdue in the conference opener one year ago, but it was the Hawkeyes that were considered among the best teams in the country at the time. The Boilermakers were hoping to remain on the court with them. Now, the roles are reversed.