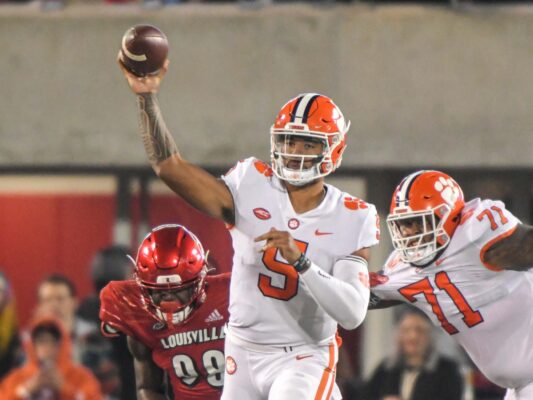 The Clemson Tigers were left for dead at the beginning of the season, after their loss to Pittsburgh on October 23, the Tigers haven’t lost since and are now ranked again in the top 25. The South Carolina Game Cocks, on the other hand, have alternated wins and losses since September 25 and are now looking for their seventh win of the season.

The Clemson Tigers were early season favorites to make the College Football Playoff. Since then, they kind of fell off the map per se, but now they are surging their way back and they are looking for another good bowl game this season.

The Clemson offense is averaging 26.5 points per game on 362.7 total yards per game. Those 362.7 total yards per game break down to 199.9 passing yards and 162.8 rushing yards per game. The Tigers’ offense is led by once Heisman Trophy hopeful, DJ Uiagalelei. Uiagalelei has completed 178 of 323 pass attempts for 1,960 yards and has competed for just nine touchdowns and eight interceptions. To complement the passing game, the Tigers look to their freshman running back, Will Shipley. Shipley has rushed for 550 yards on 112 attempts and has found the endzone nine times.

Can The Game Cocks Hold The Tigers

The Game Cocks offense has been averaging 23.3 points per game on 330.8 total yards per game. Those 330.8 total yards break down to 200.9 passing yards and 129.9 rushing yards per game. The Game Cocks’ offense is led by their sophomore quarterback, Luke Doty. Doty has completed 86 of 143 pass attempts for 975 yards while throwing five touchdowns and three interceptions. To complement the passing attack, the Game Cocks look to their senior running back, Zaquandre White. White has rushed for 561 yards on 81 attempts and has found the endzone just two times this season.

The Clemson Tigers are hot at the right time of the season. The Game Cocks, on the other hand, have put up a good fight, but ultimately, Clemson has too much going on for them, on both sides of the ball. Look for the Tigers to come out victorious in this matchup.