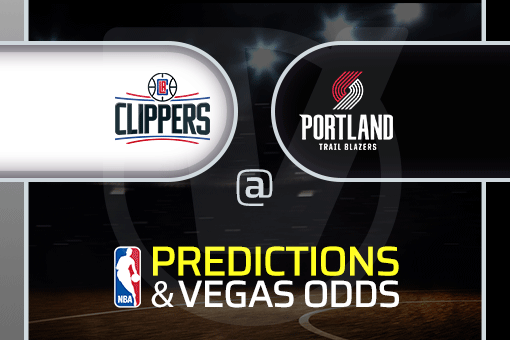 Looking for the latest Clippers vs Blazers prediction? Look no further Vegas Odds has you covered.

The Clippers are 1-2 in their last three games coming into Tuesday night’s matchup with the Blazers. Averaging 106 points per contest good for 30th in the NBA.

Portland on the other hand is also 1-2 in its last three games.

The Blazers are averaging 109 points per contest good for 23rd in the league.

This is the second meeting between these two teams this season. But little can be taken from that matchup as it was in the preseason.

Portland is 4-4 at home this season while the Clippers are 4-5 on the road.

Portland is 9th in the league in opponents’ ppg giving up just 110ppg.

The Clippers on the other hand give up 106 ppg to opponents on the season, good for 2nd in the association.

These two teams have been riddled with injuries this season.

The Clippers are still working star forward Kawhi Leonard back in as he comes off a torn ACL, and are without their other star player Paul George who is out with a right hamstring tendon injury.

Portland on the other hand has been without star guard Damian Lillard twice this season with calf injuries. He is nearing return so this is something to monitor as he could suit up for this matchup yet.

Jerami Grant has stepped in well this season to fill Lillard’s shoes in Portland though. A recent signing in the off-season Grant has averaged 21 ppg this season and has had a number of big games during Lillard’s absence.

The Clippers on the other hand have struggled offensively this season due to the fact that their two best offensive players have been sidelined for much of the season.

Norman Powell and Marcus Morris have been forced to pick up the offensive load for the Clippers when George and Leonard are out, averaging 14 ppg each.

These two teams play well on the defensive side of the ball but are somewhat limited offensively without their star players.

Expect this matchup to go to script but expect score projections to be affected if Lillard or Kawhi suit up as both will be listed as questionable.

If picking a winner; the Blazers are the favorite.