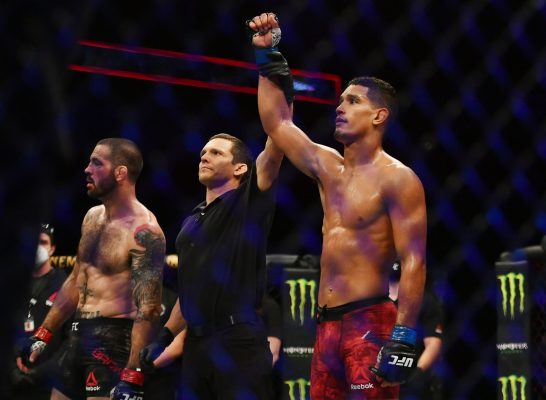 After some controversy with Colby Covington’s latest comments, promising MMA prospect Miguel Baeza has said that Covington is a good guy with the right attitude in the gym.

MMA fighters aren’t known for their eloquence or good manners nor do they need to be. Yet, Colby Covington has earned himself a bit of a name for being harsh on sparring mates, his gym buddies and generally anyone in the MMA world.

As an up-and-coming star, a lot is riding on Covington’s shoulders and his gung-ho persona may serve him well in public, but in person, he tends to be a completely different individual says teammate Miguel Baeza.

An endorsement from Baeza speaks volumes, as the fighter has already had three finishes in his first three promotional appearances, shaping the athlete as a worthy prospect. Following a string of successes, Baeza wanted to thank Covington who has earned himself the nickname ‘Chaos,’ because of his boisterous personality.

“Colby Covington, he’s a good guy,” said Baeza responding to criticism that the man can be too harsh in the gym and make it hard for his teammates from MMA masters to train properly.

Despite what Covington says in public, Baeza explained, he was a completely different person in the gym, and part of the fighter’s success. “He’s only pushed us to get better.”

Known by his moniker, ‘Caramel Thunder,’ Baeza has been putting in quite a bit of work and it has been paying off.

He submitted Takashi Sato with an triangle choke half way through their bout at UFC on ESPN 18 on Saturday.

Commenting on that fight, Baeza did say he had an opening in Round 1 but wanted to take his time. He scored two TKO’s against both Hector Aldana and Sato in his first Octagon fights as well, drawing the spotlight onto himself.

While the road ahead isn’t easy, and Baeza is still only a rookie, he feels confident that he will be able to conquer the very summits of the UFC when given a chance. We wish him luck and perhaps the guidance of Covington will truly make a difference.