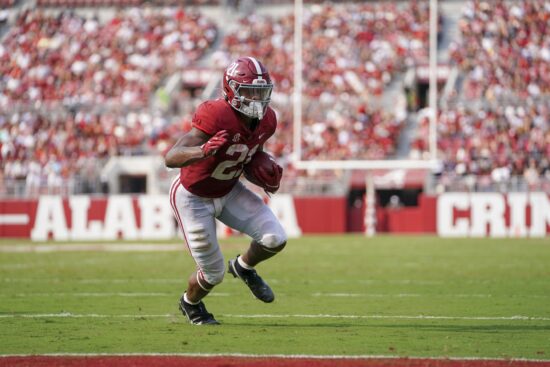 The Alabama Crimson Tide and the Florida Gators are set to do battle this weekend as Alabama travels to Florida to have their first SEC contest of the season. Alabama has had two easy wins so far this year, with a 44-13 win over Miami (FL) in their opener, followed by a 48-14 win against Mercer.

Florida has opened the year with a 35-14 win over Florida Atlantic and a 42-20 win over South Florida. Both of these teams have gotten really solid wins early in the year but have not had to face a team like each other yet this season.

Alabama has gotten off to a very fast start in both games so far this season and have essentially ended the game at the half. This game might not be any different as Alabama is running like a well-oiled machine early in the season.

The Crimson Tide is gaining over 450 yards a game while allowing 251 yards per game. They are playing very well, and a lot of that can be attributed to quarterback Bryce Young who has thrown for over 570 yards and seven touchdowns through two games.

Florida is Attempting to Upset Alabama

It is weird to think that #11 in the country winning over #1 is a huge upset, but that is exactly what it would be as Alabama is going to be heavily favored in any game that they play.

Florida has been led by their rushing attack. Anthony Richardson has 274 yards on the ground this year, and as a team, Florida has averaged over 600 yards of offense so far this year.

This is going to be a high-level football game and one of the best of this weekend. I think that Alabama is just so much better than Florida, however. Alabama has come out quick in their first two games and have blown out a Top 15 team already this season. I think that Alabama will get off to a quick start in the game, and the game has a chance to be over by halftime.

Florida’s offense has moved the ball well, but they have not seen a defense like Alabama’s yet this season. Their defense has been solid, too, but they have allowed over two touchdowns a game to non-Power Five competition. I think Florida has a chance to hold on early in this one, but once we get into the middle of the game, Alabama will pull away quickly.