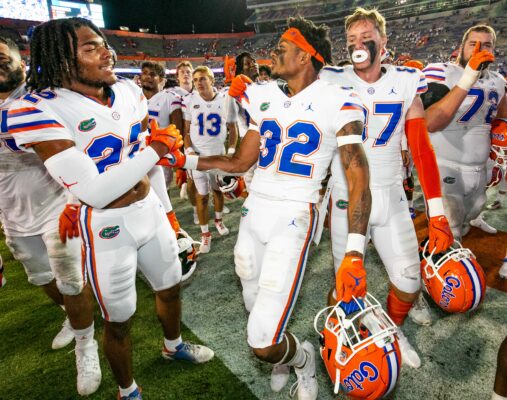 Some would say the Florida Gators were a bit underwhelming in their 35-14 win over Florida Atlantic in last week’s season opener, but UF also has a lot of turnover heading into 2021. The Gators need to find replacements for a QB and a TE that have gone to the NFL (among others), and on paper, it looks like they’ll get another easy “work-out-the-kinks” game against a South Florida Bulls team that was shut out 45-0 last week at NC State. Oddsmakers have the Gators as -29 point favorites.

Florida coach Dan Mullen knew it was going to be no easy task replacing QB Kyle Trask (2nd round to Tampa Bay) or TE Kyle Pitts (4th overall to Atlanta). Those two NFL-bound players were huge factors in the Gators ranking top in the FBS last year with 388.4 passing yards/game.

What Mullen has brewing now (albeit after just one game) is a budding QB controversy. Gators coaches have reiterated all offseason that the new signal-caller is Emory Jones who went 17/27 for 113 yards with a TD and 2 INT last week against Florida Atlantic. You can’t overlook what redshirt freshman Anthony Richardson did in his snaps though, breaking off a 73-yard TD scamper to clinch the win over FAU. Richardson had 160 yards on the ground on just 7 carries.

The good news for Florida is that they shouldn’t expect a whole lot of defensive resistance from USF on Saturday. The Gators rushed for an even 400 yards last week (46 carries) while the Bulls gave up 525 yards of total offense in losing 45-0 to the Wolfpack.

The Jeff Scott era got off to a great start last season with a 27-6 win over the Citadel in the 2020 season opener. The Bulls have hit a wall and hit it hard since then, starting with a 52-0 loss to Notre Dame the very next week (worst in school history) and what is now a 9-game losing streak dating back to last year.

It’s only game two of the season, but South Florida already has QB issues after Cade Fortin was benched after leading the team to just one first down over his first five drives against NC State. Timmy McClain was also benched after throwing 2 INTs in his time on the field.

The Gators could pull away in this one – if Anthony Richardson starts getting some snaps in the 2nd half. The Bulls were horrible last week, but they also had to travel to face a very underrated NC State squad. UF couldn’t cover the number against Florida Atlantic last week at home, so why trust them to do so this week on the road in Tampa?