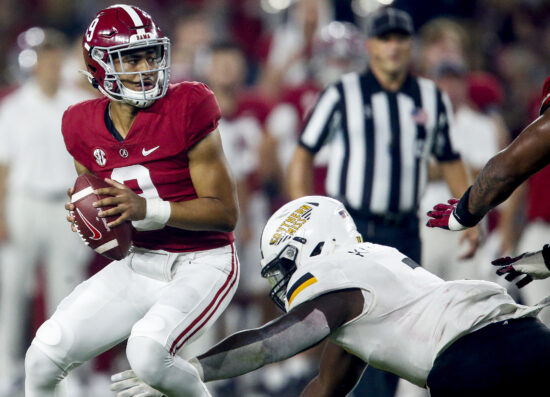 Since the first preseason poll came out we have not had the same top five, and this week is no different. This week, however, we not only have a new top five, but we have a new number one for the first time in weeks, as Bryce Young drops to number two. So let’s take a look at what the new top five is, and what they did last week to get their new ranking.

As it’s been said in previous weeks, it’s still early, but the quarterbacks are definitely in control of the Heisman Trophy talk. Bryce Young continues to wow the critics and remain in the top five and really giving himself a chance. Matt Corral comes up from unranked in the preseason polls to now the best odds to win the trophy, after four weeks of play. Let’s take a look at how these quarterbacks performed in week four.

Nothing like moving into the number one spot while having a bye week. That is exactly what Matt Corral did this week. He sat at home, practiced, and prepared for the week ahead.

Matt Corral and the Rebels travel to Alabama this week to take on the number one ranked Crimson Tide.

Old reliable coming in at number two this week. Bryce Young hasn’t missed a week in the top five so far this season. Young had another amazing day under center for the number one ranked Crimson Tide. Young completed 20 of 22 of his pass attempts for 313 yards. In those 313 yards, he completed five passed that went for touchdowns, and one pass that was intercepted. Young’s five touchdown throws led Alabama to a 63-10 victory over Southern Mississippi.

Bryce Young and the Crimson tide are at home this week, where they will welcome fellow Heisman Trophy candidate Matt Corral and the number 12 ranked Ole Miss Rebels

Desmond Ridder, just like Matt Corral had a bye week this week and ended up moving up one spot in the most recent Heisman Trophy odds.

Riddler and the number 7 ranked Bearcats will travel to South Bend to take on the number 9 ranked Notre Dame Fighting Irish in one of two top-ten matchups that week five has to offer.

Spencer Rattler may have helped Desmond Riddler move up a spot in this week’s top five with his sub-par performance this week as the number 4 ranked Sooners squeaked out a victory over West Virginia. Rattler completed 26 of 36 passes for 256 yards. Rattler threw one touchdown pass and one interception in the 16-13 victory to remain undefeated.

Rattler and the Sooners will travel to Kansas State this week to take on the 3-1 Wildcats.

JT Daniels didn’t even attempt the most passes on the team last week, but still moved up to number five in this week’s rankings. The Bulldogs put up 63 points last week on Vanderbilt, so Daniels didn’t need to be on the field too much. When he was on the field, Daniels completed 9 of 10 passes for 129 yards. Daniels completed two touchdown throws and didn’t throw any incompletions.

Daniels and the number two Bulldogs travel to Arkansas to take on the number 8 ranked Razorbacks this week. This is the second top-ten matchup that week five has to offer us.

Looking Ahead At Week Five

Two of these five quarterbacks are going up against top ten teams this week, and no one is playing any pushovers. This may be the week that we truly determine who is a clear-cut favorite, and who is just rounding out the top five. Rattler is actually the only quarterback this week who isn’t going up against a ranked team. Look for, yet again, another exciting week in college football.