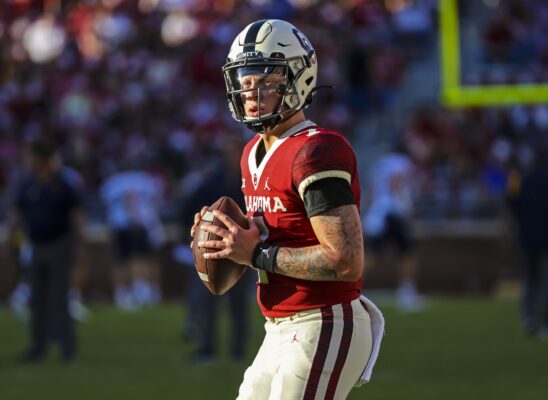 Once again, we have some flopping in the top five, even though at this point in the season I’m not entirely sure if anything outside of the top two will ultimately matter. The top two candidates are heads and shoulders above the rest of the field, and they are beginning to truly stand out and show that. So without further ado, let’s get into the new Heisman Trophy top five candidates leading into week six of the college football season.

It’s been said in previous weeks that it’s still early in the voting to really tell if there are any standouts, but I think once we look at this week’s standings, it has come down to a two-man race. Now, I’m not saying that any of these quarterbacks can’t make a surge still, it just seems unlikely. But, with that being said, let’s take a look at what these quarterbacks did in week five to earn their spots in the rankings.

Another week, another victory for Bryce Young and the number one team in the nation. I’m not telling you anything new right now if I were to sit here and tell you that Bryce Young is really good. So let’s take a look at what he did this week to jump Matt Corral and retake the number one spot. Young, competing against Matt Corral, had a pretty good day under center, defeating Ole Miss 42-21. Young completed 20 of 26 passes for 241 yards and completed two touchdown passes. The one downside of Young’s day is the one interception that he threw, which is only the second one he’s thrown on the season.

Young and the Crimson Tide travel to Texas A&M this weekend to take on the Aggies.

Matt Corral had a decent game under center, but it wasn’t quite enough this week, as his Rebels dropped this one to the Crimson Tide, 42-21. Corral completed 21 of 29 pass attempts for 213 yards and one interception. Corral didn’t throw an interception in this game, continue his streak of four straight games without an interception throw.

The Rebels are at home his week to take on 13th ranked Arkansas.

Desmond Ridder and the Bearcats traveled to South Bend last week and took down the Fighting Irish, 24-13. Ridder completed 19 of 32 passes for 297 yards and two touchdowns. Another positive of Ridder’s game at the then-undefeated Irish was that he didn’t throw any interceptions.

Ridder and the Bearcats are at home this week to take on the Temple Owls on Friday night.

CJ Stroud is back into the top five after his amazing performance that helped the Buckeyes run over the Scarlet Knights, 52-13. Stroud had himself a complete day, completing 17 of 23 pass attempts for 330 yards. On top of that, Stroud threw five touchdown passes and no interceptions. Strouds five touchdown passes were completed to four different receivers.

Stroud and the 4-1 Buckeyes are at home Saturday to take on Maryland.

Spencer Rattler rounds out this week’s top five after leading the Sooners to a 37-31 victory over the Wildcats of Kansas State. Rattler completed 22 of 25 pass attempts for 243 yards. Rattler completed two touchdown passes while throwing one interception.

Rattler and the Sooners travel to Texas on Saturday to take on the 21st ranked Longhorns.

Looking Ahead At Week Six

All five quarterbacks have good matchups this week with two of the five taking on top 25 opponents. It’s, once again, another chance for Matt Corral to potentially have a great game and jump over Bryce Young for the top spot again. Check back next week to see what our top five looks like.