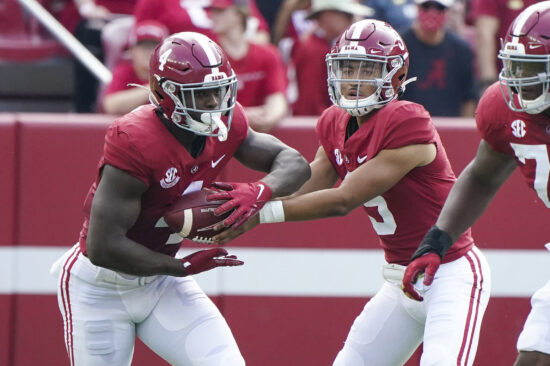 Week two in College Football proved to be tough for the Top 5 Heisman Trophy contenders. While four stayed the same, there is a newcomer to the field. Let’s take a look at where we stand after week two.

A bit of a shakeup happened during the past week, with JT Daniels dropping completely out of the top 5 and everyone other than Bryce Young moving around. Also, there is a newcomer, Matt Corral, to the mix. So let’s take a look at last weeks performances for the top 5 Heisman candidates.

Young, once again led the Crimson Tide to their second victory of the season, defeating Mercer 48-14. Young didn’t have quite the game he had in week one, but still impressive. Young passed for 227 yards on 19 of 27 attempts while throwing three touchdown passes. To go along with his stellar performance, Young didn’t throw any interceptions. He did have a terrible QBR for the week, coming in at 35.4.

Bryce Young and the Crimson Tide travel to the swamp to take on the 11th ranked Florida Gators on Saturday.

Matt Corrall, the newcomer to the top 5, had a terrific day passing in the Rebels 54-17 route over the Austin Peay Governors. Corrall, now 2-0 on the season, threw for 281 yards on 21 of 33 passing while throwing five touchdowns. With his five touchdowns, Corrall didn’t throw any interceptions, though still posting a terrible QBR of 58. Believe it or not, the five touchdown passes aren’t a career-high for the senior. Corrall threw six touchdown passes against Vanderbilt on Halloween of 2020.

Corrall leads the Rebels in a battle against the Tulane Green Wave Saturday night.

Rattler completed all but six of his passing attempts on last Saturday as the Sooners absolutely destroyed the Western Carolina Catamounts by a score of 76-0. Rattler passed for 243 yards on 20 of 26 passing attempts while throwing five touchdown passes. Rattler also didn’t throw a single interception, while posting a QBR of 94.0. Rattler also added four rushing attempts for 29 yards, with a long run of 22 yards.

Rattler and the Sooners take on the Nebraska Huskers at home Saturday.

Stroud and the Buckeyes dropped the game last Saturday to the Oregon Ducks, by a score of 35-28. Stroud did everything he could to keep the Buckeyes in the game. Stroud completed 35 of 54 attempts for 484 yards and three touchdowns. Stroud did throw one interception while posting a QBR of 81.4. Stroud had the most passing yards of all the top 5 candidates in week two.

Stroud and the Buckeyes take on the Tulsa Golden Hurricane’s this week.

Uiagalelei and the Tigers recorded their first victory of the 2021 season when they defeated the South Carolina Game Cocks by a score of 49-3. Uiagalelei didn’t have a stellar day, but was solid, completed 14 of 24 passes for 171 yards and one touchdown. Uiagalelei did throw an interception while posting a QBR of only 51.9. Uiagaleli did rush for 23 yards on five attempts as well.

Uiagalelei and the Tigers take on the Georgia Tech Yellow Jackets this week.

Looking Ahead At Week Three

Of the top five candidates, Bryce Young is the only one who is going up against a ranked opponent. I would predict that Young will have a standout game, considering he has already proved this season that he truly rises to the level of his completion as he faired better while playing the then 13th ranked Hurricanes rather than when the Crimson Tide took on the Bears last week.