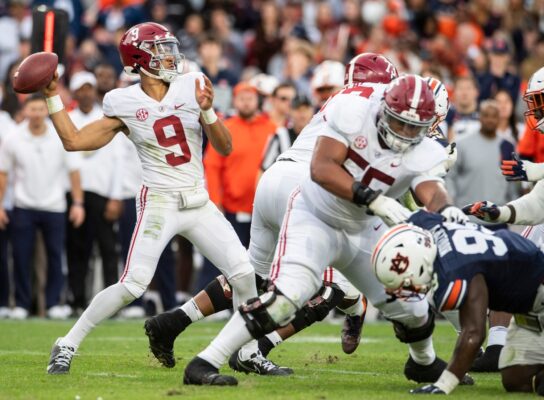 The College Football regular season is over, and what a season it has been this year. We have seen everything, and now we are on to Championship Saturday, with one random regular-season game left to play due to postponement. Let’s take a look at our new Heisman Trophy odds top five and what they did last week to get to where they are.

There is much less separation in the top five this week compared to last week, but Bryce Young has reclaimed his top spot. We also see two newcomers to the group this week in Aidan Hutchison and Will Anderson. Four out of these five players have a chance to secure their place in the Heisman odds this week as they will all be fighting for a Conference Championship. CJ Stroud and the Ohio State Buckeyes are the only ones being left out of that conversation. So without further ado, let’s break down the week that was for these three athletes.

Bryce Young, who has been the leader in the clubhouse for most of the regular season, will end the regular season at the top as well. The Alabama Crimson Tide needed four overtimes (even though they aren’t true overtimes) to end up securing the victory over their rival, the Auburn Tigers, and to win the Iron Bowl. Young had a good day, but nothing exciting to write home about. Young completed 25 of 51 pass attempts for 317 yards while throwing two touchdowns and one interception. This was the first interception that Young had thrown since October 9th and just the fourth interception he’s thrown all season.

Bryce Young and the Alabama Crimson Tide will take on the Georgia Bulldogs for the SEC Championship Saturday afternoon. A game preview of that game can be found here.

Aidan Hutchinson is one of the two newcomers to the top five this week. Aidan Hutchison, just like Will Anderson, is a player on the defensive side of the ball. Hutchison is a senior defensive end. On the season Hutchison has 54 tackles, 32 tackles for loss, twelve sacks, two forced fumbles, and one fumble returned for a touchdown. Last week in the matchup against the Ohio State Buckeyes, Hutchison recorded seven tackles, five solo tackles, and three sacks.

Aidan Hutchison and the Michigan Wolverines will take on the Iowa Hawkeyes for the Big Ten Conference Championship this Saturday afternoon. A preview of the game can be found here.

CJ Stroud, who was the leader after week twelve, has fallen to number three after the defeat at the hands of the Michigan Wolverines last week. In the loss, Stroud still had a great game. Stroud completed 34 of 49 pass attempts for 394 yards while throwing two touchdowns and no interceptions.

CJ Stroud and the Ohio State Buckeyes will be at home preparing for a bowl game this weekend, as they failed to make the Big Ten Conference Championship Game.

Will Anderson is one of the two newcomers to the top five this week. Will Anderson is, surprisingly a sophomore linebacker, our first defensive player that we’ve seen all season. Anderson on the season has 85 tackles, 49 solo tackles, 14.5 sacks (which leads all of FCS), and 36 assists. Last week against the Auburn Tigers Anderson recorded seven tackles, six solo tackles, one sack, and three tackles for a loss.

Will Anderson Bryce Young and the Alabama Crimson Tide will take on the Georgia Bulldogs for the SEC Championship Saturday afternoon. A game preview of that game can be found here.

Rounding out the top five is Kenny Pickett, who is in a familiar place, as I feel he has been right around number five all season. Pickett and the Pittsburgh Panthers ended their regular season with a trip to Syracuse, where they defeated the Orange, 31-14. Pickett completed 28 of 38 pass attempts for just 209 yards while throwing four touchdowns and one interception.

Kenny Pickett and the Pittsburgh Panthers will take on the Wake Forest Demon Deacons for the ACC Championship this Saturday evening. A preview of that game can be found here.