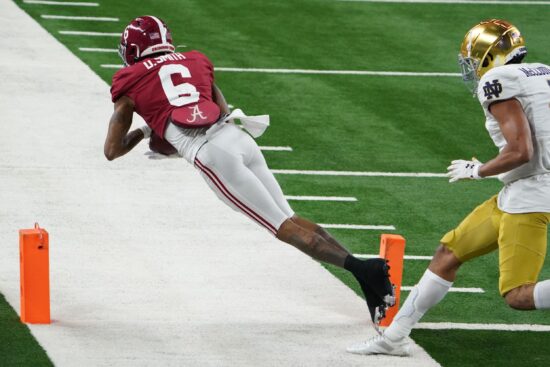 Alabama vs Ohio State is the matchup that will determine the college football champion for this season. Alabama Crimson Tide will make the record (5th) appearance in the Championship Game when they face off with the Ohio State Buckeyes who won the inaugural game in 2015.

Before the regular college football season started, Alabama was one of the main favorites, so it’s not surprising we’ll see the Crimson Tide in the Championship game. The same was not the case with the Ohio State Buckeyes.

In fact, this team was a +245 underdog in the semi-final game against Clemson. However, the Buckeyes absolutely demolished the Tigers and booked themselves a place in the biggest game in college football. The Ohio State Buckeyes are once again the underdogs. The question is can they upset the odds one more time? That’s exactly what we’ll try to answer in this Alabama vs Ohio State preview!

Alabama is entering the NCAAF Championship game as the #1 ranked team in the nation. Their opponent is currently the #3 in the rankings. Ohio State got to the final game by beating the #2 team ranked Clemson.

The win over Clemson was Ohio State’s seventh win in 2020. This team finished the year without a single defeat, with their most recent loss happening back in December 2019. Arizona’s record is even more impressive – the Crimson Tide have won 12 games this season and their previous defeat happened in November 2019.

For one of these teams, the unbeaten record is coming to an end on January 11. The last time these two met, the Buckeyes were the winners of the Alabama vs Ohio State game. This time, oddsmakers suggest it should be the other way around. And bettors seem to agree!

According to ESPN, Alabama is favored more than any other team in the history of NCAAF Playoffs. In the semi-final (2021 Rose Bowl), the Crimson Tide were 19.5-point favorites, which was the largest spread in years. In fact, only two bowl games since 1978 had a larger spread. Nevertheless, despite that, almost 70% of bettors put their money on Alabama.

Is Alabama Really the Best College Football Team in the Nation?

The short answer is: YES. A bit longer answer is that two of the biggest favorites for the Heisman Trophy (award for the best player in NCAAF) play for Arizona, namely receiver Devonta Smith (-455) and quarterback Mac Jones (+400).

The two are among the not-too-many people who will keep 2020 in good memory. Smith will probably win the award, thus becoming the first wide receiver to win the Heisman since 1991. The reason for this is that he was nothing short of brilliant in 2020, with more receptions (98) and receiving yards (1,511) than any other player in the nation.

Jones was also fantastic in 2020, with the highest completion percentage (76.5%) of all the quarterbacks in NCAA. He was also the leader in yards per pass attempt (11.4) and passer rating (202.3). In 2020, Jones also made 32 touchdown passes, with only four interceptions.

The two Heisman hopefuls continued playing well in 2021. In the 2021 Rose Bowl Game, they were instrumental for Alabama’s 31-14 win over the Fighting Irish.

The game saw Smith getting seven catches, covering 130 yards, and scoring three touchdowns, for which he was declared the Offensive MVP. Jones was almost equally impressive, with 25-of-30 passes for 279 yards. He was responsible for four touchdown passes in that game.

The Rose Bowl will also be remembered for the breathtaking performance of running back Najee Harris. The man who was in the top 10 candidates for the Heisman Trophy rushed for 125 yards on 15 carries in that game.

After crushing Clemson in the semi-final, Ohio State have cemented the reputation of giant-slayer. Clemson entered that game as a -7.5-favorite, but the Buckeyes ended up winning by 21 points. Can they do something similar in the College Football Playoff National Championship game?

Probably not, as their performance against Clemson has probably made everyone in Alabama focus even more on the preparation. You can be sure that Nick Saban and literally everyone involved with the Crimson Tide will go the extra mile to ensure no surprises happen.

That said, Alabama vs Ohio State prediction is a win for the Crimson Tide. Still, the question remains whether they can cover the spread.