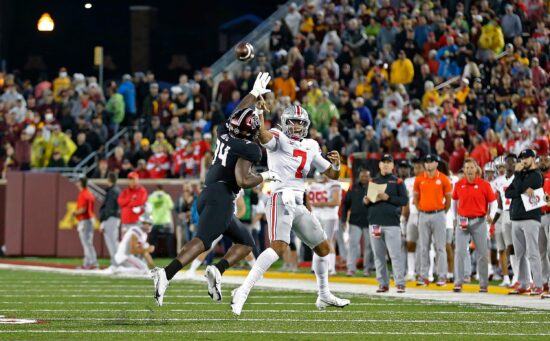 After facing the Fresno State Bulldogs and narrowly escaping with a victory, the Ducks now face Ohio State. The Oregon offense looked fine in their first game of the season; the defense was the problem. Now, that same defense will have to face C.J. Stroud, who’s coming off a win over Minnesota. With a 14.5 point spread, Oregon doesn’t have much room for error.

In the first half of Ohio State’s game against Minnesota, there were a lot of questions about C.J. Stroud. He looked nervous in the beginning but really started to open up in the second half. He finished the game with 294 yards passing and four touchdowns. Now, he’ll face the Ducks defense, who surrendered 24 points to Fresno State.

The Defense Should Be the Main Concern for Oregon

As they head to face one of the strongest offenses in college football, concerns arise for Oregon’s defense. In their game against Fresno State, they surrendered nearly 400 total yards. If they want any chance of competing against Ohio State, they need to do better than that. The offense looked a little sluggish at times, too, as Anthony Brown Jr. passed for just 172 yards.

Oregon could still be without star defensive end Kayvon Thibodeaux against Ohio State. Thibodeaux is a key part of the defense that could help pressure C.J. Stroud. Without him in the lineup is another significant blow to the Ducks’ defense. Hopefully, for Oregon, Thibodeaux will be ready to go on Saturday morning.

It’s Time for the Buckeyes to Let C.J. Stroud Loose

At the beginning of their game against Minnesota, Ohio State had the training wheels on Stroud. By the second half, training wheels were off, and he did rather well. Stroud’s success will depend on how quickly he can make decisions. If Oregon fails to have Thibodeaux in the lineup, Stroud will have a lot more time to work in the pocket.

The good news is Stroud seems to be pretty good at improvising. He’s done well in his first game against a tough defense like Minnesota. On Saturday, he’ll face a team that nearly lost to Fresno State. The main question now is whether they can cover the 14.5 point spread. Ohio State’s nearly a lock, but that’s a hefty spread for them to cover.

We believe that Ohio State will win this game, but we have to remember the spread. In their game against Minnesota, they were unable to cover. This time we feel C.J Stroud will shake the jitters early, and covering the spread shouldn’t be a problem.