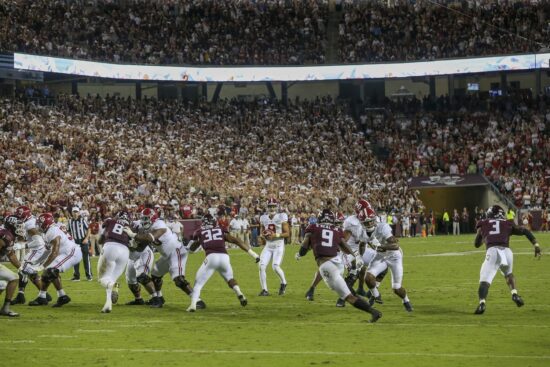 For the first time in a long time, the Alabama Crimson Tide are going into the game without the number one ranking in the nation. After losing last week, the Tide will look to right the ship and stay in the top five in the country.

But they will face a tough test from a Mississippi State team that can put up points and make life difficult on a team like Alabama that has shown its share of weaknesses.

Alabama Hopes To Rebound From Loss

For Alabama to win this game, they will need to be better defensively than they were against the Aggies. The Crimson Tide gained over 500 yards of total offense, but those yards were rendered meaningless by all of the points they allowed. Mike Leach’s air raid offense will put similar pressure on the Alabama defense, and the Tide will need to avoid wiping out the work of their offense for a second straight week.

Two weeks ago, Mississippi State did something that Alabama could not do a week ago, beating Texas A&M in College Station. The Bulldogs broke a two-game losing streak with that victory, holding the Aggies to just 22 points, nearly half of what Alabama gave up against A&M in the same venue just a week apart. Now the question is whether or not Mississippi State can hold the Alabama offense in check as well.

Statistically, the Mississippi State defense is close to even with the Alabama defense in terms of yardage allowed this season. They are giving up 318 yards per game to opposing offenses, just 14 yards more per game than what Alabama is conceding. But against an offense like the one Alabama brings to the table, the defensive performance of the Bulldogs so far this year might not be enough.

While Mississippi State performed better on the road against Texas A&M than Alabama did, the transitive property does not win football games. Alabama is much better offensively than the Bulldogs and should be able to distance themselves from Mike Leach’s squad here.

Expect Alabama to keep their season alive in a resounding fashion as they will win and cover the big point spread.