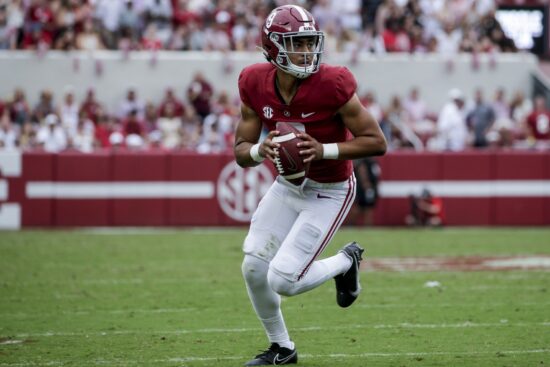 Alabama hosted Ole Miss last weekend and made quick work of them. Taking a 28-0 lead into halftime, Alabama continued their winning streak and finished the game 42-21. Texas A&M hosted Mississippi State as a seven-point favorite and ended up losing 22-26, taking their record to 3-2.

We are witnessing another year where Alabama is destroying everyone in its path. Having only been tested once, a two-point victory against Florida, Alabama has not shown a whole lot of flaws in their game to this point. They are currently top 30 in the nation defensively, giving up just 18.2 points per game, while the offense is third in the nation, scoring 45.6 points per game.

In his first year as the starting quarterback, Bryce Young is off to a great start for the Crimson Tide. He is completing 73% of his passes for 1,365 yards and 17 touchdowns while only throwing two interceptions. After sitting out the Ole Miss game, Alabama’s lead running back Brian Robinson Jr. should be a full participant this Saturday.

This defense has proven to be impenetrable all season. They are giving up less than 300 total yards of offense to opposing teams per game this season. They have also found a way to record nine different takeaways, which is good enough for fifth in the nation. Heading into Texas A&M, after the Aggies just suffered a loss, expect this defense to try and put pressure on them early to try to keep all of the momentum on their side of the field.

Short Memory for the Aggies

Suffering their second loss of the season last weekend, Texas A&M finds themselves in a tough spot. They fall all the way down to 12th in the SEC and will struggle to keep themselves in the top 25 nationally. Texas A&M held the lead on two separate occasions this past weekend; they were just unable to close out the game.

The Aggies’ biggest offensive threat comes from their dual rushing attack of Isaiah Spiller and Devon Achane. Spiller has carried the ball 68 times for 445 yards and two touchdowns. Achane has recorded 43 carries for 296 yards and two touchdowns. Going up against the Alabama defense that gives up minimal rushing yards per game, the Aggies will need these two to find a way to be effective if they want to keep this game close.

Defensively, Texas A&M has been much better than their record shows. The defense is giving up just 12.6 points per game which is the fifth-lowest in the nation. The one biggest flaw in this defense has been their inability to stop the run, giving up over 140 yards per game. The secondary has been solid so far this season, but with Bryce Young coming to town, it could be a long day for those defensive backs.

Alabama is currently 3-2 against the spread overall this season and 1-1 when they have been on the road. They have hit the over three times this season, with their most recent game falling short by 17 points.

Texas A&M is 2-3 against the spread and 2-1 when they are playing at home. This will be the first game of the season where Texas A&M is the underdog.