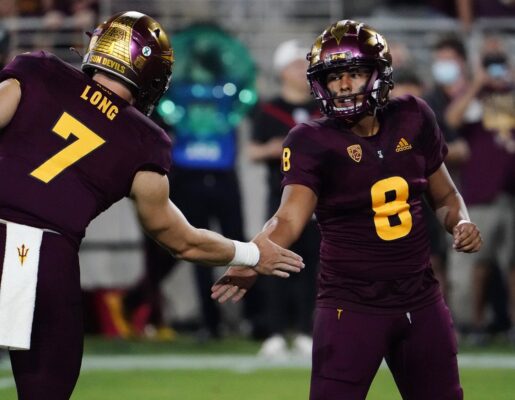 The teams in first and second place in the Pac-12 South are set to tangle this week when Arizona State travels to Salt Lake City to take on Utah. Both teams are undefeated in conference play so far, with the winner of this game sitting in the driver’s seat to make the Pac-12 championship game. And with both teams excelling on defense this season, the squad that does the best job of getting stops will have the best chance to come away with a win.

Arizona State has won three straight games since starting conference play, beating Colorado, UCLA, and Stanford to shoot to the top of the league standings. Their win over UCLA was a win on the road against a team ranked 20th in the nation, with the Sun Devils winning that game by double digits. In fact, Arizona State has won every game they have played against a conference foe this season by double digits.

For Arizona State, balance on offense has been what has propelled them to a 5-1 start this year. They are averaging over 200 yards passing and 200 yards rushing per game this season to go with a defense that is allowing under 300 yards per contest. With their only loss this season coming against a ranked BYU team on the road, a win in this game could vault Arizona State near the top-10 in the rankings.

Last week, the Utah Utes went to Los Angeles and beat USC in Southern California by 16 points to improve to 2-0 in Pac-12 play. Like Arizona State, the Utes have yet to lose a conference game, with Utah’s two losses this season coming on the road against BYU and San Diego State. This week, to remain unbeaten in conference play, Utah will need quarterback Cameron Rising to deliver.

Rising has seven touchdowns and no interceptions this season for a Utah team that averages just over 30 points per game. Avoiding turnovers will be a must to avoid giving the Sun Devils easy scoring chances on sudden changes. But they will need more than just solid game management to win here, as Arizona State won’t make any phase of the game easy on the Utes.

While Utah’s home field advantage is palpable in any game they play, Arizona State is extremely well coached by Herm Edwards and his staff.

Their poise and balance will make the Sun Devils more than capable of coming away with a win here. Expect a tight game, but for Arizona State to move to 4-0 in Pac-12 play.