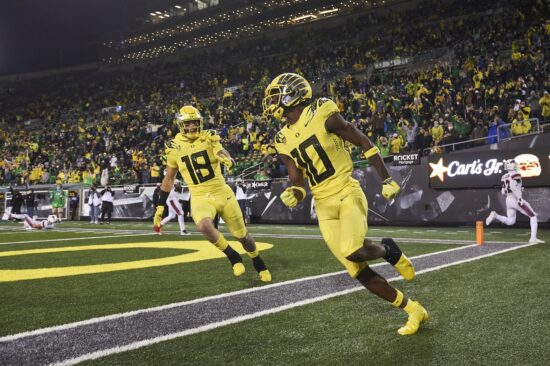 The Arizona Wildcats head into Oregon to take on the Ducks on Saturday night. Arizona currently sits at 0-3 on the season while the Ducks are 3-0 and ranked #3 in the country. Arizona has struggled mightily this year, while Oregon has already had some big wins to their credit.

Arizona is coming off a loss to Northern Arizona, and Oregon started the season with a win against Fresno State and followed it up with a win over Ohio State. Just looking at these three games shows a big difference in the level of competition that these teams have faced so far this year.

Oregon Looks to Continue their Play

Anything less than a blowout win for Oregon this weekend would spell a bit of trouble. They are scoring the ball at a good rate and moving it well, but their defense has struggled at times.

They allow 418 yards per game, but they have also played two of the best offenses in the country in Ohio State and Fresno State. Look for Oregon’s defense to perform really well this weekend, as Arizona’s offense is not great.

Arizona Needs to Generate Some Offense

Arizona has only managed to score 16 points a game this season, playing subpar competition. That is not a good thing for them as they head in to play Oregon on the road. They are not able to run the ball with any effectiveness as they only gain 79 yards on the ground per game. Look for Oregon to really play the pass this weekend and force them to make plays through the air.

Their top running back only has 115 yards on the ground this season. No matter how the offense looks this weekend, to win the game, the Wildcats are going to have to play some defense. They haven’t played much defense so far this season, so I wouldn’t think that they would start now.

Oregon is a really good football team this year and is a playoff contender. Arizona is not a good team and will struggle to win many games. This game should hit the over with as many points as Oregon will score. I also think Oregon will cover the spread relatively easily.

The Ducks will cruise in this one. They have the tools to make this one a very lopsided game, and with the struggles of Arizona, I think they will do that quickly. I would bet on Oregon Ducks to cover the spread and win big against the Arizona Wildcats!