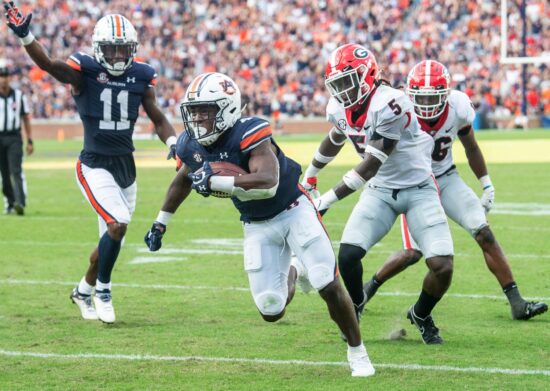 The Auburn Tigers find themselves out of the top 25 after losing 34-10 to Georgia last week. That’s not even a bad loss considering the Bulldogs have climbed to #1 in the AP Top 25.

The only other loss for the Tigers was against #7 Penn State, and the Arkansas Razorbacks have lost to #1 Georgia and #13 Ole Miss.

Tigers Going to Attack on the Ground

Auburn has failed their two biggest tests this season, falling 28-20 at Penn State and losing 34-10 at home to Georgia last week. The Tigers do have a signature win for 2021, winning 24-19 at LSU, but they’d like to add to that resume on Saturday in Fayetteville.

The Tigers were able to win this meeting last season, 30-28 at home but failing to cover the -13.5 point spread. Auburn was ranked #13 at the time and were just coming off a 27-6 loss to Georgia. The physical game with the Bulldogs the week prior didn’t seem to bother the Tigers as they ran for 259 yards vs. Arkansas last season. Can history repeat itself?

Bryan Harsin’s squad would be wise to get the running game going again as QB Bo Nix is completing less than 60% of his passes on the season. To his credit, Nix has only thrown one interception, but the safer option is still to ride Jarquez Hunter and Tank Bigsby, who have a combined 923 yards and 8 TD this season.

We had an early game of the year candidate last week in Arkansas’ 52-51 loss to Ole Miss. The teams combined for over 1200 yards of total offense, and there were 14 TDs scored.

The loss to Mississippi, at the very least, was a nice stat padder for Arkansas QB K.J. Jefferson as he bolstered his Heisman Trophy resume with 326 yards and three TD passes as well as 85 yards rushing and three more scores. Jefferson had just 70 total yards vs. Georgia, but that’s also the #1 defense in the country.

To their credit, the Razorbacks are battle-tested with wins over top 25 teams Texas and Texas A&M this season. It’s a tough gauntlet of A&M, Georgia, and Ole Miss the last three games, but at least Arkansas is back home after playing the last two on the road.

Arkansas is a -3.5 favorite in this matchup partly because they played so well in Auburn last season but also because they’ll have the best player on the field in K.J. Jefferson.

That being said, the Razorbacks’ defense has to be beaten down after last week, ping-pong match with Ole Miss in which the Rebels racked up 324 yards on the ground.