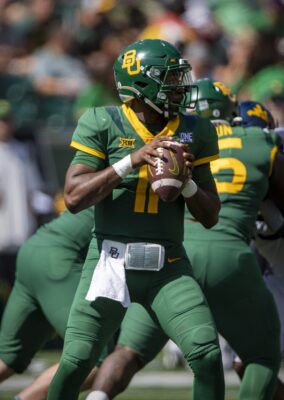 The BYU Cougars are down a few spots in the rankings after suffering their first loss of the season last week, 26-17 at home against Boise State. Another tough challenge awaits Brigham Young in week 7 with a visit to the 5-1 Baylor Bears who have one of the more dynamic QBs in college football in Gerry Bohanon. So much so in fact Baylor is a -5.5 favorite against the #19 team in the country.

It’s somewhat impressive that Brigham Young only lost by 9 points last week considering they threw an interception and lost three fumbles. QB Jaren Hall had his first 300+ yard passing game of the season which is something to build on and Tyler Allgeier ran for 73+ yards for the fifth time in six games this season.

Last week’s loss snapped a five-game win streak to start the year for the Cougars. They’ve had some quality competition too in wins over Utah (26-17) and Arizona State (27-17) as underdogs. BYU has also won their only two road games of the season at Arizona and at Utah State which bodes well for the trip to Waco.

The BYU defense has used the bend but don’t break approach this season, giving up plenty of yards (238.2 pass, 128.5 run) but just 20.5 ppg which is 32nd in the country. The Cougars face a challenge on Saturday afternoon though, as Baylor is racking up 461.5 yards per game this season.

Baylor had risen up to #21 in the rankings until falling out after their only loss of the season, 24-14 to #19 Oklahoma State in week 5. That was on the road in Stillwater though against a Cowboys team that is up to #12 in the rankings so that could be considered a “quality loss” if there is such a thing.

The good news is that the Bears bounced back last week in a 45-20 win over West Virginia. Bohanon threw for 336 yards and 4 TD in the victory over the Mountaineers after having just 173 yards in the air against Oklahoma State. Bohanon has also run for a TD in five straight games.

One of the reasons BYU is an underdog on Saturday is because the Baylor offense is so diverse. Aside from Bohanon – who along with Matt Corral is one of two NCAA QBs to throw for 1,000+ yards without an INT this year – Baylor has a great running attack. The Bears are 16th in the country running for 227.7 ypg and are 17th in scoring putting up 38.3 ppg.

Public betting is probably going to be split on this game as a ranked team getting points vs. an unranked one is always a tempting play. BYU played sloppy last week and although they should be better against Baylor, the Cougars have also played four of their last five at home though so going on the road will be a test.