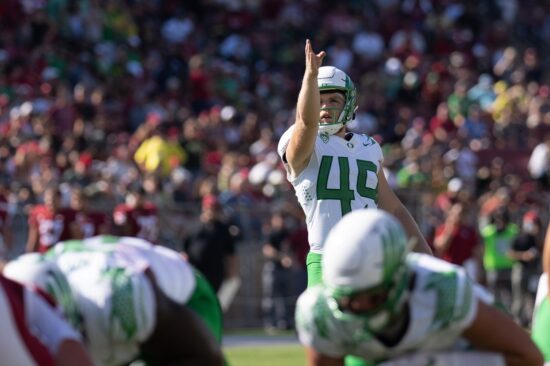 The Oregon Ducks were in the top-five in the college football rankings before their last game, but they dropped out of the top-five after suffering a loss to Stanford in that contest. Now, the Ducks are tasked with trying to pick up the pieces and avoid a second loss as they get set to face California. With Cal struggling mightily this season, the Ducks have an opportunity to get right at home against a Pac-12 opponent.

So far this season, California has won just one game in their five outings in 2021, losing all four of their games against FBS opponents. Their lone win came against Sacramento State, who put up 30 points in the loss to the Golden Bears. Since that game, California has lost its first two games against Pac-12 competition, dropping contests to Washington and Washington State, who are going through down years.

Against Oregon, the Golden Bears need to get more production out of the quarterback position to have a chance at an upset. Starting quarterback Chase Garbers has seven touchdown passes and five interceptions on the season. Against an Oregon team that is capable of playing some of the best defense in the Pac-12, Garbers is going to need to deliver the ball to his receivers more consistently.

Oregon With No Room For Error

In their last time out, the Oregon Ducks may have eliminated themselves from College Football Playoff contention. The Ducks went down 10-0 to the Stanford Cardinal in that game, came back to take the lead, but let Stanford tie the game before losing in overtime. Now, with a loss to their name on the season, Oregon has to win games convincingly to prove they still belong in the playoff discussion.

If Oregon is going to avoid a second straight loss, they are going to have to do it without star running back CJ Verdell. Verdell was lost for the season against Stanford when he injured his leg, which will drastically impact the way that the Ducks are able to run the ball. If they cannot find a suitable replacement to produce immediately, Oregon could be in danger of suffering a second straight upset loss.

This looks like a get-right game for Oregon against one of just three teams in the Pac-12 that don’t have a win in conference play. The loss of Verdell will impact Oregon in the long run, but it shouldn’t be too big of a hurdle for the Ducks to clear in this Friday night matchup.

Expect Oregon to win this game and cover the two-touchdown spread.