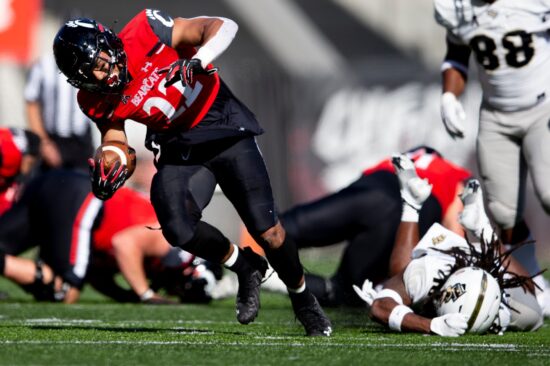 The Cincinnati Bearcats have made it through the first half of the college football season without a loss. And thanks to all of the chaos in the sport this season, that has been good enough to put them at number two in the rankings heading into this week.

To stay there, the Bearcats will need to get through the Navy Midshipmen, who have struggled this season but possess an offense that can be tough to defend.

So far this season, the Cincinnati Bearcats haven’t played a single game that has been all that close, beating all of their opponents by double figures. That includes their last game, a 35-point win over the UCF Knights. And like the 2017 UCF team that had a perfect season, this Bearcats team will receive plenty of praise as a potential College Football Playoff team if they can keep picking up victories.

Desmond Ridder is the star of this Cincinnati team at the quarterback position, but it has been the defense of the Bearcats that has been leading the team. Cincinnati is allowing under 14 points per game, giving up under 300 yards per contest to opponents so far in 2021. In this game, they will have to contend with the triple option, in which Cincinnati knows the run is coming but will not know from where.

While Army and Air Force have been flourishing this college football season, the Navy Midshipmen have been struggling. Navy is off to a miserable 1-5 start, with their lone win coming against UCF. Last week, Navy lost to Memphis on the road, dropping a 35-17 contest where the Midshipmen were not built to make up the type of deficit that they faced.

Against Cincinnati, Navy has two advantages that they will hope to exploit. The first will be the triple-option offense, which can use misdirection to fool the Cincinnati defense and make the game more competitive than it would be otherwise. The second is a crowd that will be loud for the biggest game on Navy’s schedule outside of their annual rivalry game against Army, which could help slow down the Cincinnati offense.

While Navy will have home-field advantage in this contest, Cincinnati is so much better on offense and defense that they should be able to blow the Midshipmen out of the water.

Cincinnati’s defense may be the second-best in college football behind Georgia, and bettors can expect a low scoring output from the Navy offense and for Cincinnati to cover as a heavy favorite to protect their top-two ranking.