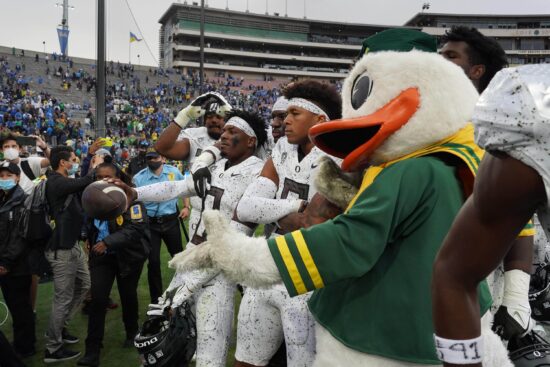 The Oregon Ducks were all over the map last week, down 14 then up 17 before hanging on for a 3-point win at UCLA. A win is a win though and the Ducks were able to climb three spots in the rankings to #7. The Colorado Buffaloes visit Eugene on Saturday afternoon looking for some answers as they’ve scored 14 points or less in five of the last six games. OU is a huge -24.5 favorite in this one.

The Buffaloes put up just 35 yards rushing on 28 carries and had just 69 yards passing on 17 attempts in last week’s 26-3 loss to Cal. Colorado also gave up six sacks and now face a Ducks team that is 3rd in the Pac-12 with 16 sacks on the year.

CU doesn’t do a lot in the ground game either, meaning the Buffaloes might have a tough time keeping up with an Oregon team that scores 33.9 ppg. Jarek Broussard has just 81 yards rushing total over the last two weeks and 2nd leading rusher Alex Fontenot has a mere 26 yards over that span.

Can OU put on the throttle to cover the -24.5 against Colorado on Saturday? QB Anthony Brown went 29/39 for 296 yards vs. the Bruins but didn’t throw a TD and also had 2 INT. Brown also added 85 yards and a TD rushing while Travis Dye had four rush TDs in the win in Pasadena.

Oregon does rank 2nd in the Pac-12 in scoring (33.9) and Colorado is very middle of the pack in the conference defensively. The Buffaloes don’t make a lot of spectacular plays on defense, ranking last in the Pac-12 in INTs (3) and sacks (8), while also recovering just two fumbles on the year.

These two teams didn’t play last year but even if they didn’t there wouldn’t be much to take away as Colorado was much better last season. The Buffaloes are one of the worst teams in the Pac-12 but Oregon also has a tendency to play down to their competition. 24.5 points looks like a lot in a conference matchup.