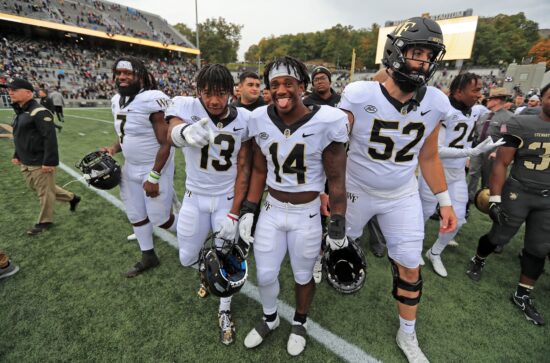 The Wake Forest Demon Deacons continue their climb up the rankings after a thrilling 70-56 win at Army last week. The Demon Deacons (7-0) have now scored 35 points in all seven games of their season, a trend they hope will continue when the 3-4 Duke Blue Devils visit on Saturday afternoon. Wake has a good chance of pushing their mark to 8-0 as -16.5 home favorites in his matchup.

Duke Coming Off the Bye

The Blue Devils get a bit of an edge being idle last week but that’s also given them extra time to stew over a 48-0 loss at Virginia in week 7. It was the third straight loss for Duke following a three game win streak and now they’re bringing up the rear in the ACC.

The good news for Duke is that they’re up against a Wake Forest defense that gave up over 400 yards rushing to Army last week en route to 56 points. Despite their record, the Blue Devils do have a good offense as their 474.4 total yards/game rank 13th in the nation. The Blue Devils are racking up their yards in a versatile manner too, going for 268.6 ypg passing and 205.9 ypg rushing.

Gunnar Holmberg is completing over 70.2% of his passes this season but had his worst game of the year last time out going 20/34 with 0 TD and 2 INT. RB Mataeo Durant was also held under 100 yards rushing for the first time in the last four games. Both players should be able to get back on track against a Wake defense giving up 430 ypg.

The Demon Deacons have risen to the highest in the polls since 1947, and it will be a challenge to keep that spot with the Blue Devils coming to town. Duke can move the ball on offense, but Wake Forest has the capability to stay in this one in a shootout – which is expected with a betting total sky high at 71.

Wake hung tight last week even as Army’s triple-option was running for 416 yards on 70 attempts. Demon Deacons QB Sam Hartman was electric, completing 23 of 29 passes for 458 yards and 5 TD. Hartman now has 19 TD to just 3 INTs on the season and gets a Duke secondary that allowed 364 yards and 2 TD to Virginia’s Brendan Armstrong in their last game.

We know the Wake Forest offense will thrive on Saturday, but what is their defensive mindset after giving up 56 points to Army last week? The Demon Deacons have the worst rush defense in the ACC (207.7) and are 8th vs. the pass (229). Wake Forest has allowed 34+ points in three straight games.

A trip up has to be coming for Wake right? There are some potential tough matchups with North Carolina, NC State, and Clemson coming up but the Demon Deacons can’t overlook Duke in this spot. The Wake Forest offense can definitely put up the numbers to cover the -16.5 number, but there are some real concerns with the Demon Deacons defense especially with Duke coming off a bye.