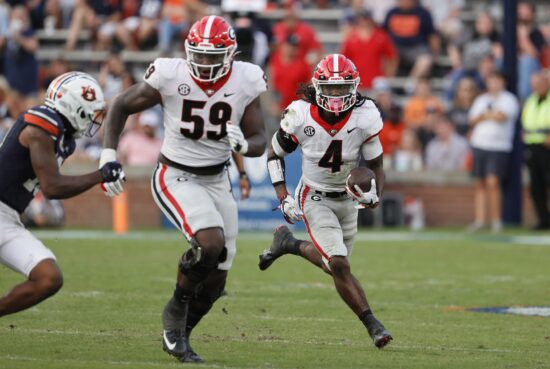 For the first time this season, the Georgia Bulldogs are taking the field as the number one team in the country when they host the Kentucky Wildcats. In this battle of 6-0 teams, two tough defenses will attempt to stifle the opposing offenses.

And the winner of this matchup will have the inside track to an appearance in the SEC title game, along with a chance to make the College Football Playoff.

So far, the Kentucky Wildcats are 6-0 on the season, having beaten every team in front of them. In their last two games, they have taken down traditional SEC powerhouses in LSU and Florida. But this week, the level of competition ramps up for the Wildcats, as they take on the number one team in the country in search of a signature win to vault them into the upper echelon of the rankings.

To have a chance at beating the Bulldogs, Kentucky will need a relatively mistake-free performance from quarterback Will Levis. Levis has thrown six interceptions this season but will face more pressure than he has all season from the Georgia defense. If he and the rest of the Wildcats can avoid turning the ball over, they will give themselves a chance to pull off a monumental upset on the road.

Georgia Playing As Number One Team

Georgia’s first game as the number one team in the country comes against another undefeated team in the Kentucky Wildcats. The defense of the Bulldogs has been dominant this season, allowing two touchdowns or less in every game that they have been involved in. This week, they will need their offense to keep up with the performance of their defense, as their opponent has been solid on the defensive side of the ball in their own right.

The Bulldogs’ offense hasn’t been nearly as impressive as their defense, but it has more than done the job this year. JT Daniels has been battling injury, but backup quarterback Stetson Bennett has thrown eight touchdowns and just two interceptions in his place. As long as Georgia can continue to simply be above average on offense, their defense should be able to carry them through here.

While an undefeated Kentucky team seems tempting as more than a three-touchdown underdog, the Georgia defense is simply too good to go against right now.

The Bulldogs are giving up 5.5 points per game on average at the halfway point of their season and don’t appear poised to give up much more in this contest. Expect Georgia to win convincingly and to prove that they are number one for a reason.