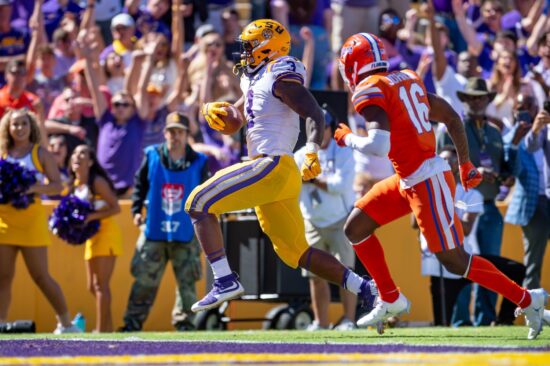 Ole Miss and LSU are both .500 or better teams in the SEC this season heading into their matchup on Saturday afternoon. Both picked up much-needed wins last week to add further intrigue to their matchup. But with both teams playing in several close contests in conference play already this season, this is a matchup that does not need any additional intrigue to be an exciting one.

LSU surprised the Florida Gators last week, beating Florida at home by a score of 49-42. After scoring 40 combined points in their previous two games against Auburn and Kentucky, LSU enjoyed an offensive explosion in the win over Florida. Forcing four turnovers against the Gators helped the cause of LSU, who will play out the rest of this season with Ed Orgeron as their coach before Orgeron departs the program.

This week, another offensive outburst may be necessary to beat Ole Miss, a team that is no stranger to putting up big offensive numbers under Lane Kiffin. Another game from Tyrion Davis-Price like the one he had against Florida would help facilitate that, as Davis-Price rushed for 287 yards and three touchdowns against the Gators. A loss here would reduce the Tigers to 4-4 on the season and would require them to win multiple games down the stretch to make a bowl.

Ole Miss Coming Together As A Team

Ole Miss survived a surreal scare against the Tennessee Volunteers last week in Lane Kiffin’s return to Knoxville. The Rebels won the game 31-26 and survived a final drive from the Volunteers that ended inside the Ole Miss red zone. They also quite literally survived the throwing of debris onto the field by Tennessee fans after fans were dissatisfied with the officiating.

Quarterback Matt Corral accounted for over 400 total yards between his rushing and passing against Tennessee. He will have to be careful with the ball against an LSU secondary that has struggled at times this season but is also capable of forcing turnovers with some solid prospects. But the Rebels proved that they are mentally tough last week against the Volunteers and will need to match that toughness with execution.

Ole Miss was impressive down the stretch against Tennessee, but the Rebels are not beating teams by double digits in conference play as of late.

LSU seems to have found something offensively last week and should be able to ride their running game to keep the ball out of Corral’s hands. Ole Miss should win this game, but LSU should cover the spread in what will be a competitive affair.