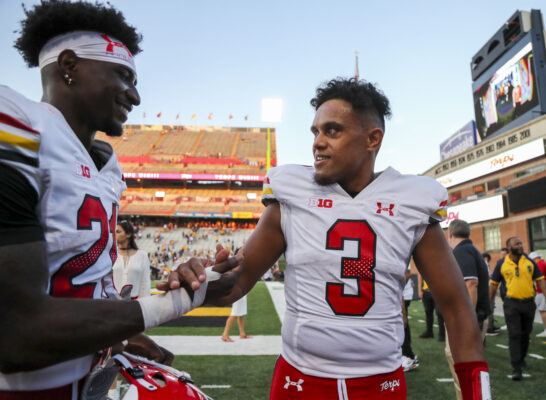 The Maryland Terrapins will kick off Big Ten play on Friday night, also making their first road trip of the season in a road contest against the Illinois Fighting Illini. You almost couldn’t ask for a better start to the year for Maryland, getting two non-conference wins and now squaring off against one of the worst defenses in the country. Illinois has a Big Ten win under their belt, but are +7 home underdogs in this one.

Terrapins Off to a Perfect Start

Mike Locksley couldn’t have scripted the beginning of the 2021 season better for his Terrapins. Maryland was able to get 30-24 win over power 5 team West Virginia in the opener (as +2.5 home underdogs) and then got to work out their depth chart in a 62-0 thumping of Howard in a tune-up prior to conference play.

Locksley also has to like what he sees from Junior QB Taulia Tagovailoa, who has shown a complete grasp of this offense in his 2nd season in College Park. Tagovailoa had 332 yards and 3 TD in the season opener and was a very efficient 22 of 27 with another 3 TD last week. Tagovailoa is completing 76.2% of his passes through two weeks and gets an Illinois defense that ranks 122nd in the country in pass defense.

We knew the Terps’ offense was going to be good this year, but their defense has looked solid in holding experienced QB Jarret Doege to 1 TD and 2 INT in the opener and then absolutely shutting down Howard last week holding them to 146 total yards.

Illinois Gets Peters Back

The Fighting Illini got off to a good start to the Bret Bielema era, getting a conference win in a 30-22 win over Nebraska as +6.5 home underdogs. The wheels have come off since then though, with Illinois losing 37-30 to UTSA and most recently suffering a 42-14 blowout loss at Virginia in their first road tilt of 2021.

While the defense is the major concern through three games for the Illini, their offense also hasn’t been at full strength after starting QB Brandon Peters was injured in the season opener after throwing just 3 passes vs. Nebraska. Rutgers transfer Art Sitkowski hasn’t played badly with 6 TD and 1 INT, but the team is going back to a now-healthy Peters on Friday night.

Tagovailoa has to be licking his chops to face this Illinois defense, a unit that gave up 232 rushing and 111 passing yards to Nebraska QB Adrian Martinez in the season opener. Most recently Brennan Armstrong was 27/36 for 405 yards and 5 TD last week.

There’s going to be way too much Tagovailoa in this one, as it seems he accounts for 4 TD minimum through the ground and via the air. Peters is back for Illinois, but honestly, Sitkowski may give them a better chance to win.