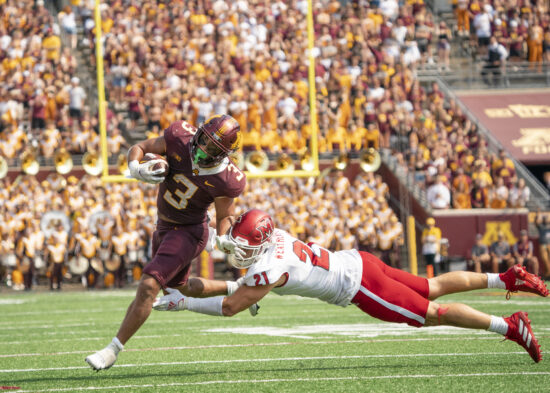 The Colorado Buffaloes will need a quick turnaround from an emotional letdown when they host the Minnesota Golden Gophers on Saturday afternoon. The Buffs had #5 Texas A&M on the road last week in Denver but gave up a TD with 2:41 left to suffer a 10-7 loss. The Golden Gophers also have experience vs. a top 5 team this year, losing 45-31 to Ohio State in their season opener.

Not only did Minnesota suffer a loss to the Buckeyes in week 1, they were also dealt a crushing blow when RB Mo Ibrahim was lost for the season with a leg injury. That was no ordinary loss, as Ibrahim had already gained 163 yards vs. Ohio State, and was coming 1076 yards and 15 TD in just 7 games last year.

The Golden Gophers offense will look much different moving forward, but they survived in a 31-26 win over Miami – Ohio albeit as -19 point home favorites last week. Treyson Potts stepped up behind a huge Minnesota offensive line to run 34 times for 178 yards and 2 TD, making up for a lackluster passing attack that had just 112 yards.

Minnesota is in a tough spot going on the road for the 1st time this season and to the tough altitude of Boulder, Colorado. The Golden Gophers gave up 341 yards of total offense against the RedHawks last week, and face a Buffaloes squad that runs the ball well but doesn’t pass much – very similar to Minnesota’s own offense.

Buffaloes Defense Give them the Edge?

Colorado and Minnesota have basically ran the same offense through their first two games of the season. The Golden Gophers have run the ball for 175+ yards in their first two contests, while Colorado ranks 30th in the country in rushing with 227 yards/game.

One big difference between these two squads is that Minnesota has a Sr. QB in Tanner Morgan while the Buffaloes go with redshirt freshman Brendon Lewis after J.T Shrout tore up his knee in the offseason. Lewis hasn’t been asked to do a whole lot in the passing game, going just 10/15 in the opening win over Northern Colorado and 13/25 with just 89 yards vs. the Aggies.

Just because Colorado is averaging less than 100 yards passing per game doesn’t mean they can’t have success this season. That’s because Jarek Broussard is averaging 5.4 ypc and Lewis can also run the ball with 120 yards on 17 carries. The Buffs’ defense has been great too, holding the Aggies to under 300 total yards last week.

The line has jumped a point since it opened at Colorado -1.5, but the Buffaloes at -2.5 still seems like a solid play with Minnesota taking their first road trip of the season. The Golden Gophers have a massive offensive line that can dominate the trenches, but the atmosphere of Boulder may get to the big boys.